Files shown multiple time in one tag, no duplicates and no replicants

I bumped into a little problem which confounds me. I have an archive with tagged files which I have imported in Devonthink. Now i’m sorting out the tags and bumped into a little problem. Quite a number of times, but not always, I see a file twice under a tag. Maybe there is a difference in the tags. No. Ok, I have a duplicate. No. When I do show in finder on both files. It really is the same file. After making a copy in finder of such a file to a safe location. Delete one of the two entries under the tag. The one instance of the file in finder goes missing (this incidentally answered another question I had: does deleting a file under a tag delete the file or just the tag from that file. It deletes the file.). Back to the problem. Rebuild database and other option have no effect either.
The double files pop up after I have used the cursor to “move/copy” files from one tag to another (drag-drop which sets files to a tag. Nice and handy). And then I delete one of the tags because the two of them are basically the same. I’m working under the assumption that if a file already has a certain tag, it is ignored when I “copy” it to a tag. You can’t put the same label twice on a file can you? It is all just pointers? Or am I unwillingly creating replicants, which work as unix hard links as I understand it. Except that creating a hard link with the same name in the same dir does not succeed in unix. Tried google and the manual first. But either I did not succeed in phrasing the right question or there is nothing to be found on this topic. I will make a screeshot. But see no means to share it here.
Edit: no replicant because if a replicants exists a filename is shown italic. That does not apply to tags however. But I’m looking at files.

They aren’t UNIX hard links in the Tags. The replicants are internal.

Delete one of the two entries under the tag. The one instance of the file in finder goes missing (this incidentally answered another question I had: does deleting a file under a tag delete the file or just the tag from that file. It deletes the file.)

I am not seeing this here.

The group in DT and in the Finder still have all four files, only two have no Tags now.

I just created double entries again. I tested my assuption. If a file already has a tag and you drop a group of files on the tag which that file already has the file will show twice in the taglist under that tag. Also after a restart of devonthink. I just had an update.

If you want to test this you do

Btw if I want to drag multiple files I have to use the cloverleaf key pressed down. Does this also do something else. (I tried keymapping in help but no hits.)

That is the command-key (i’m using pc keyboard.) I found this
Keyboard-and-Mouse Combinations

The following shortcuts within DEVONthink occur with a combination of keyboard and mouse usage:

What I do is Command-drag, which is not in this list, to move a group of files from tag to another, Just a mouse gesture is no enough. You’ll loose the multiple selection.

Btw if I want to drag multiple files I have to use the cloverleaf key pressed down.

This is moving the files between tags. 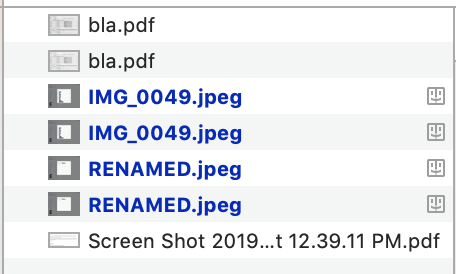 Development will have to address the duplicates created when moving files to a tag when they already exist in the receiving Tag.

On a side note: I would ask why you’re tagging this way, dragging files - especially moving redundant files between tags.

To clean up a mess and to create an alternate view. It is my administration from the last decade. Which is stored in date groups (yyyy/mm/yyyymmdd) That works best in the end. The last redundant part of the name is a (maybe redundant when using devonthink) safeguard. The tags are different views basically. And the tags are already there. So I shuffle and rearrange them and found you can create hierarchies of tags. Which I use as a view when drilling down. Eg Administration - Tax and then different sorts of tax.

I will test it. If no hotkey is pressed I cannot drag multiple files and in the case of a hierarchy you also see them where you don’t want to see them. I thought it was a feature. Without the hotkey you see all files in the lower parts of the hierarchy. With the hotkey not.

And I’m working with 300.000 files. So yeah when rearranging I may select redundant files because of the shere number. The computer will sort the redundants out I guessed. :-).

I’m merging tags, which are the same. And have used different software for tagging before coming to Devonthink.
.

Update: In case it matter i noticed the following: when I create a new tag. Select all files under a tag which shows double names (and I select everything including the double names) drag, no keys pressed, the files to the new tag. The double entries disappear.