Any idea why this search finds no matches? (see screenshot)

I’ve highlighted the word which I’ve copied and pasted into the Find box, and yet the Find function returns no matches.

All these texts are rtf unicode. 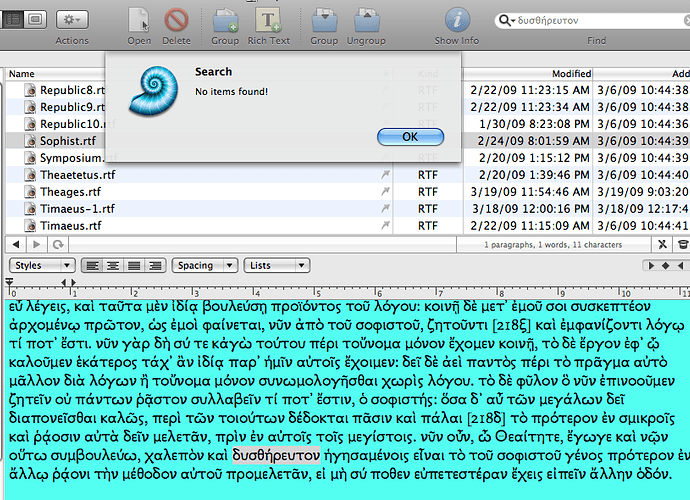 See viewtopic.php?f=3&t=7900, some greek characters with accents don’t have a normalized representation. You might try a prefix/suffix wildcard search using the first/last characters like μετεσ* or *νετε.

Thanks.
The link you give goes to this very page.

Is there any way of knowing which greek characters with accents don’t have a normalized representation?

One other thing.
The (system) find function has no trouble finding this word. It seems only the DT search function fails.

Given that the system find function, and Spotlight, have no such trouble with Greek (it seems that only the DT search function fails):

Would you be able to expand on this a little, perhaps explaining briefly what “normalized unicode” is and why DT uses it?

Edit: I see that Wikipedia has an article on unicode equivalence that would explain this to me if I could get my brain up to speed.

I’m just wondering why DT can’t do what Spotlight can. Not what I expect.

) and without diacretics Spotlight isn’t affected by this normalization issue.

Yes, ignoring diacritics is not ideal, but in many many cases returning more results than one wants is much preferable to returning none at all.

I think where this leaves me is using the asterisk whenever there is a diacritic (in Greek, at least), since apparently there’s no way to know which diacritics will be misunderstood. (Certainly not all are misunderstod. In fact, I suspect that there are rather few, but without a painful trial and error I don’t think I’ll really know.)

In the case of ancient Greek, I’d bet that most would prefer to have the search engine ignore diacritics, i.e., returning technically ‘false’ matches that differ only in diacritics, because this would return at least what one is searching for and also allow finding words that are close (which one often enough would be happy to do). Prefer this over the current behavior, that is.

Furthermore, using the asterisk renders the “Spelling” search function in DT useless, a function which I find one of the most attractive parts of DT for searching in Greek, precisely because it can lead to closely related terms.
For example, searching for δυσθ*ρευτον and clicking on “Spelling” returns matches only to what precedes the asterisk. This is of little help in this case and in most, I suspect.

So I’m left without a particularly attractive way to search Greek texts.
Does anyone have a way through this maze? (Use Spotlight?

Try using the question mark “?” rather than asterisk to substitute for a character when entering a search string. That may help meet your needs.

Thanks for the suggestion.

The results with the ? are the same as with * in the “Spelling” function.

Perhaps I misunderstood. My suggestion was to substitute the question mark for an unsearchable character (diacritic) within a word. True, the Spelling option in Search sees the word as ‘split’ by the Wildcard. But I was under the impression that a significant part of the problem was the inability to search for whole words with/without characters displaying diacritics. So, if ‘y’ is a character containing a diacritic in the string xxxxxyxx, one can search for the string xxxxx?xx. The result will include instances of the string in which the diacritic is or is not present.

Yes, the wildcard allows searching for, and finding (!), words with diacritics that DT can’t identify.

But the Spelling button remains useless.

I now know at least what DT is capable of in this regard.

I want to report that the sky may not be falling.

I simply copied and pasted into a new document, and DT had no trouble with the diacritics there. I then replaced the original with the word copied from the new document (a copy of a copy of the original!), and all works fine.

So I should say that I no longer have an example of Greek diacritics that DT can’t find. Do you?

Now I’m wondering whether there’s a problem at all.

Do other users have trouble?

Do other users have trouble?

If I’ve followed your procedure correctly, although search returns a document that might not have been returned without the work-around, it still doesn’t return the document with the search term(s) highlighted?

My procedure I suspect is as idiosyncratic as my problem.

What I meant to say is that I think there was something strange about the particular word/document I was searching. After a very roundabout procedure, it all now works as it should, highlighting included.

So I’m just wondering what ‘real’ problems might exist, since my difficulty has vanished.