when I’m opening & running DT3 to scan a couple of pages the first document is always lost, i.e. it doesn’t appear in the database. Every scan afterwards is OCRed just as normal and added to the database us it should.
Now, I am running the latest Big Sur release and I am using a SnapScan S1500.
Interestingly, the pdf itself can be found in the finder shortcut “recent files”…

Which scanner software are you using and how have you set it up? Feel free to provide screenshots of the settings.

Ihm using the original SnapScan software. I have attached numerous screenshots and would be very grateful fo assistance. It´s kind of nerve wrecking if you rely on a digital office but might loose important documents on the way… 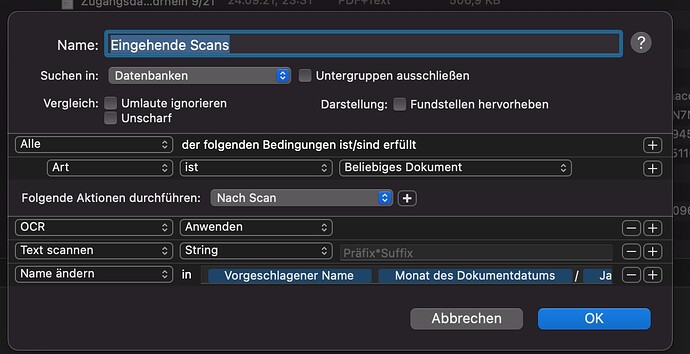 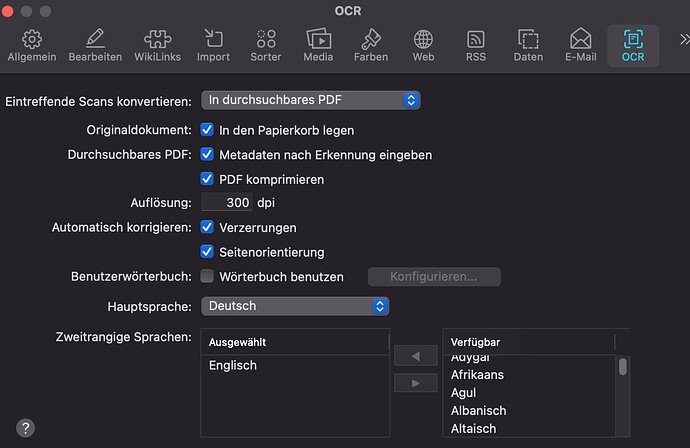 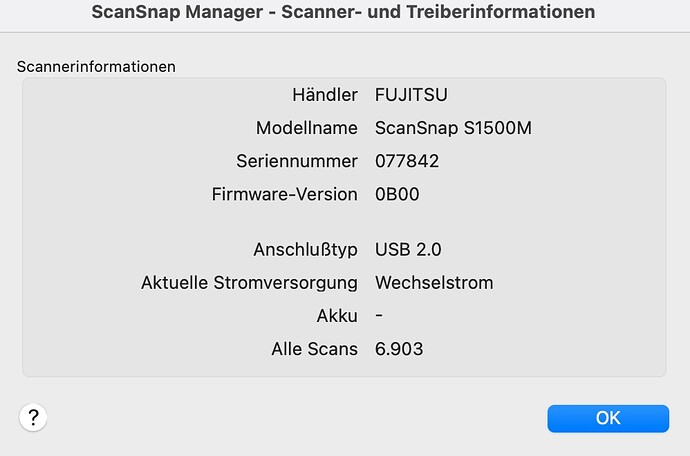 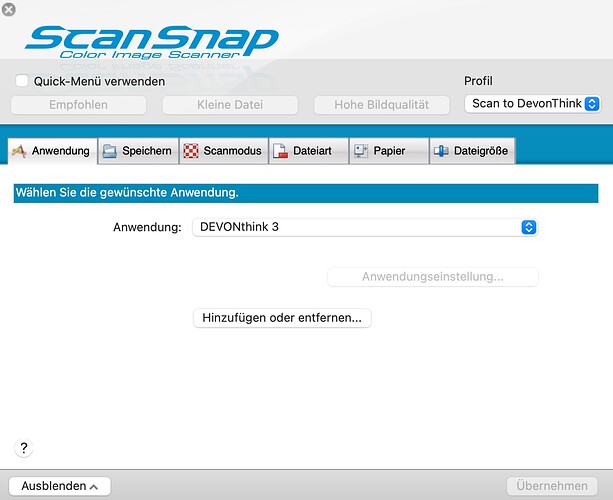 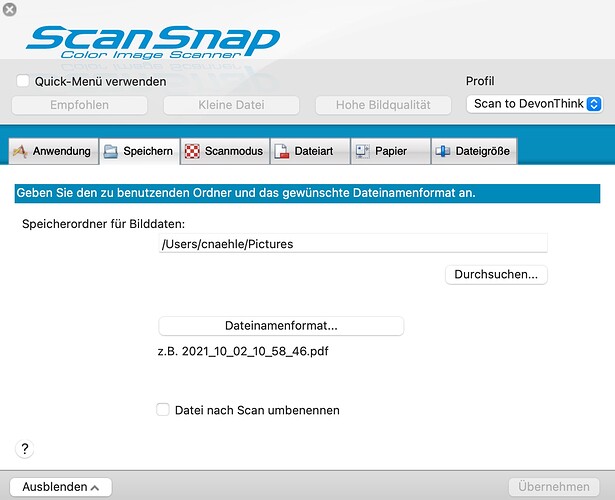 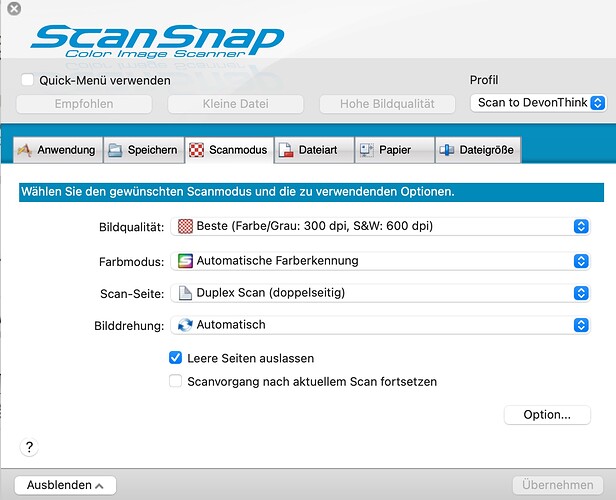 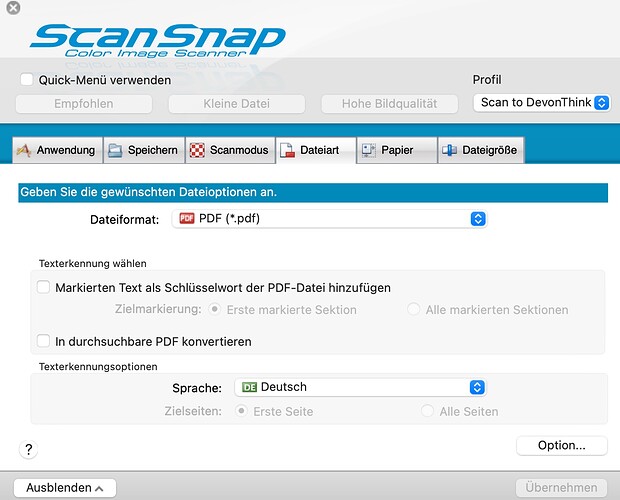 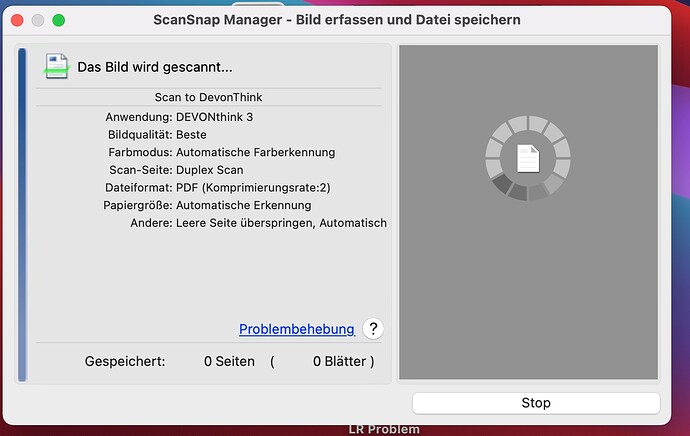 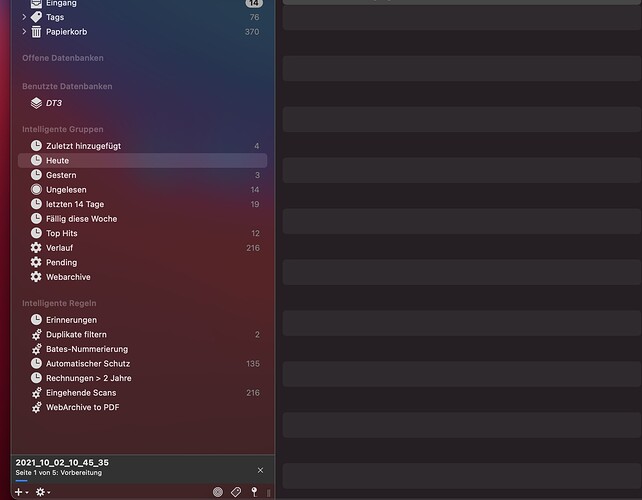 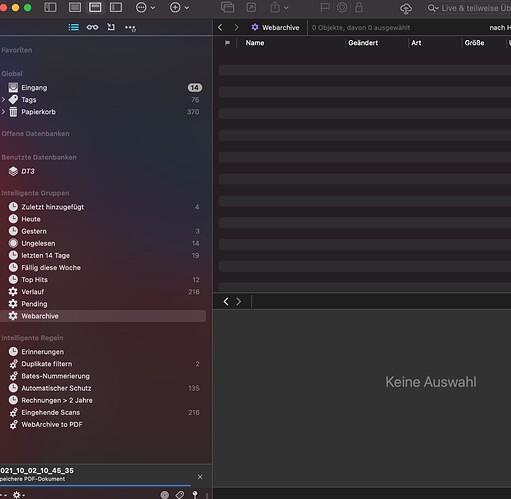 What happens if in the Scanning software you change the destination to a folder, and make that folder the DEVONthink Global Inbox folder? This could help isolate the issue. This is also the way I routinely scan stuff into DEVONthink.

Are you using Select Group in DEVONthink’s Preferences > Import > Destination?

Could that be part of the problem? Could anybody provide me with the very basic “original” rule?

I can’t provide you a rule, but if you delete the rule does the problem go away?

In my memory, there’s always been a rule on how to deal with incoming scans, i. e. I didn’t create that rule but rather changed it… If none of you have a similar rule an DT3 will still accept and the OCR incoming scans, I would give this a try…

I never pursued scanning into DEVONthink other than to put the target output from the scanner to be DEVONthink’s Global Inbox–with a few simple rules for handling incoming there. It certainly is a way to move forward now with no debugging req’d.

But I did poke around a bit as I could not recall anything about an “Incoming Scans” rule. I did find probably what you are looking for (without installing it). Click on the little symbol (haven’t the foggiest what it’s called) to the left of Help, pick More Scripts… Pick the Smart Rules tab. On that screen I see two smart rules, one being “Incoming Scans”. Maybe that’s what you are looking for and maybe by reinstalling it will repair what you broke. I don’t have a Fujitsu scanner anymore to try.

You don’t need an incoming scans rule when using a Fujitsu scanner together with its software.

OCR can be triggered automatically by selecting the appropriate setting in the preferences. However, without seeing the rule which you are running, nobody could possibly tell you whether the rule could be the cause of the problem. The easiest way to test it is to simply set the rule to on demand, effectively deactivating it.

The rule is shown on the 1st screenshot posted at the very beginning (“Name: Eingehender Scans”)…

Apologies, I had missed that as the thread expanded ever more.

Delete the Incoming Scans rule and follow your process again.
Is there a difference in behavior?

What happens if in the Scanning software you change the destination to a folder, and make that folder the DEVONthink Global Inbox folder? This could help isolate the issue. This is also the way I routinely scan stuff into DEVONthink.

While the OP didn’t use this technique (based on the info), could this behavior be a clue to what might be going wrong? Detective work needed, I guess.

While the OP didn’t use this technique (based on the info), could this behavior be a clue to what might be going wrong?

Usage of this folder for scanning is actually one common issue but this doesn’t seem to be the case.