I don’t know if the fault is with DT3 or DTTG, but when you create a Rich Text document in DT3 using a fixed-width font, sync it, add a line in DTTG and sync back, the font reverts to variable-width. Shouldn’t be happening IMHO, fixed-width fonts are there for a reason.

Which font did you actually use?

Consolas. And BTW, there’s a related problem when using fixed-width fonts : if I create a plain-text document in DT3 and try to print it, I not only get the huge margins reported here, but the (default) fixed-width font is transformed to a variable-width one. 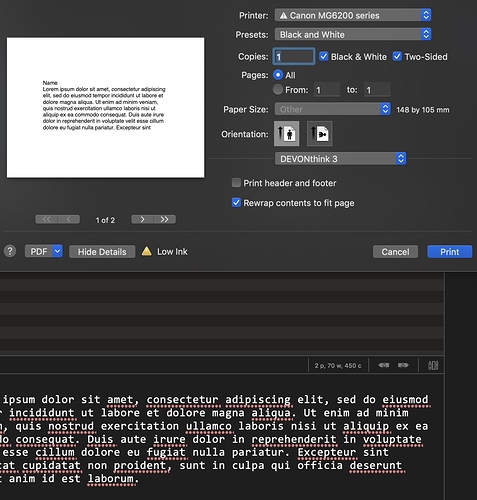 No such font over here on a relatively clean Mojave installation. Is this font indeed available on iOS? Otherwise this would explain why editing a rich text document changes the font.

I don’t think it’s available on iOS, but shouldn’t it be possible for DTTG to check when replacing a font if it’s fixed-width and user another fixed-width instead, rather than replacing it with a variable-width one?

BTW, in TextEdit when using a plain-text document, printing results in fixed-width (as opposed to the example above using DT3).

If the font isn’t available on iOS, then the text editor doesn’t know anything about it - e.g. its metrics - and the font is therefore replaced with a default font. However, I can’t reproduce the printing issue using the same font but all fonts I tried so far are used while printing.