I have a quick question. I’ve been poking around with the Scrivener beta and have discovered its ability to open a floating semi-transparent window for notes. This is a fabulous feature for me because it permits me to easily take notes on webpages and .pdf files, or anything really that is one the desktop. And because the window is transparent it doesn’t get too much in the way of what I’m reading.

Is such a thing possible with Devonthink?

Thanks for your time,

I would love this feature too–Dashboard widgets are not really pleasant to ‘cut’ to to grab a quick note or clipping. Things currently has a feature like this with a ctrl+alt+space invoke (see attached image). 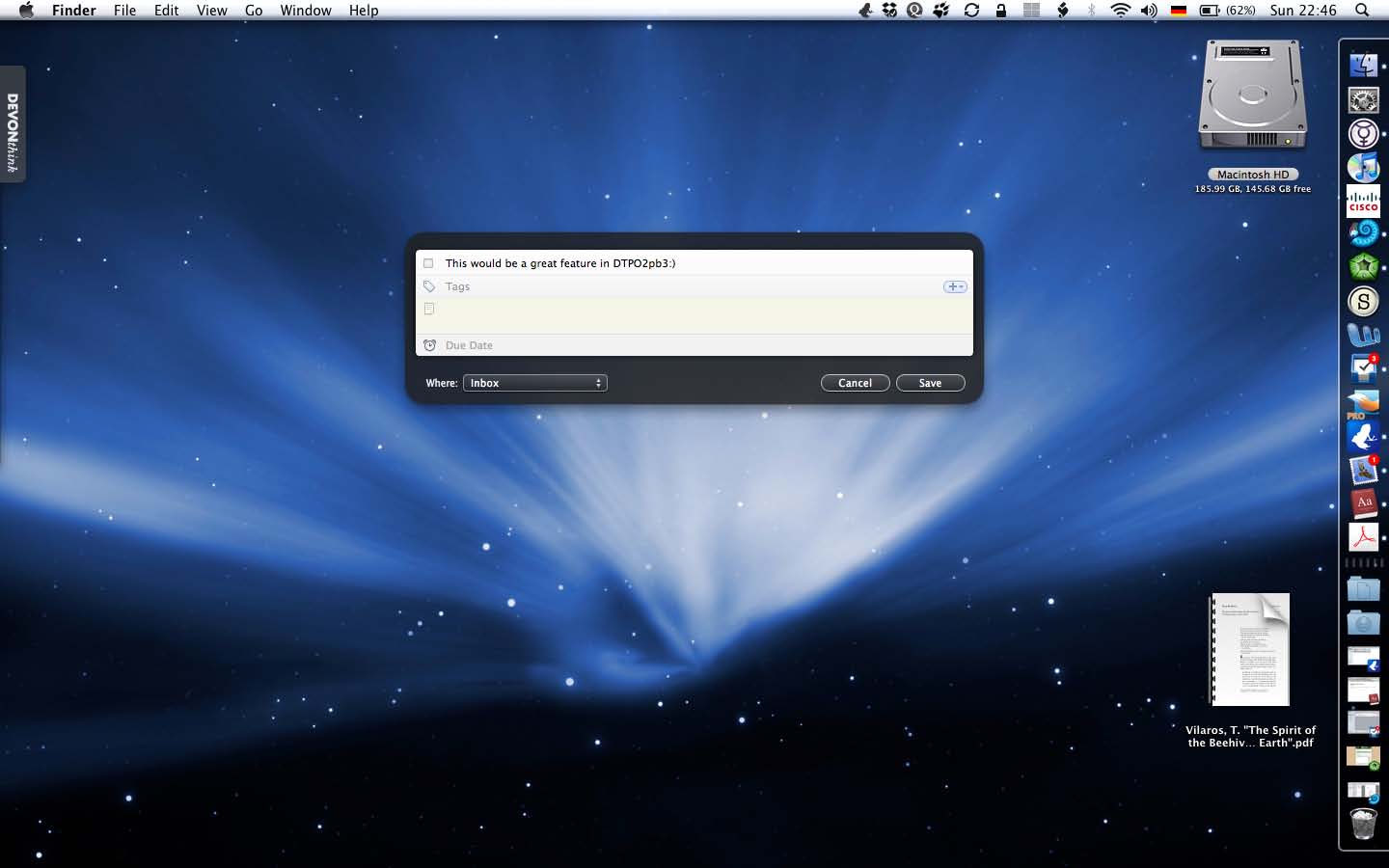 One way: Get the Afloat utility (infinite-labs.net/afloat/) and you can make floating windows in any app, including DT.

I would love this feature too–Dashboard widgets are not really pleasant to ‘cut’ to to grab a quick note or clipping. Things currently has a feature like this with a ctrl+alt+space invoke (see attached image).

So does omnifocus, thehitlist, shovebox has a similar feature. Yojimbo has a poorly implemented version. Together. Very common.

In fact, as much as I love devonthink it’s falls behind every competitor in this area. The widget simply doesn’t cut it, and it doesn’t even come with the personal edition of devonthink.

For quick notes, I use the folowing script:

(I’d do it as a rich text note, but for the life of me I can’t get the script right for this.)

For an even quicker note:

Put these in the general scripts folder. Using Red Sweater Software’s FastScripts utility, you can attach hot keys to them, meaning you’re only a couple of keystrokes away from creating and entering text in a new note at all times.

@acoyne thanks for the link to Afloat–however it does not seem to work with DT. Do you have it running in the Window dropdown?

A floating DT document is indeed very helpful for making notes and comments, saving links. The ‘take note’-feature that came with DT2 is really great. How it could be improved? It is not closed after saving; you can save it to individual databases/folders, not just the Inbox. And what about an option to re-open an existing DT document in such a floating, slightly transparent windows?