Folder marked as "Item is pending" but it is not pending

I’ve moved a lot of files from indexed into database in my iMac. Then, after deleting all databases in my MacBook Air M1, I’ve re-downloaded via webdav sync server. Now my M1 has some folders marked as “Item is pending” in my Smart Group (see captured image).

What is greyed is the folder, not the documents. If I look inside one of those folders, and all documents are present and does not have the “cloud” icon, as shown in second folder. You can see that “Revista Helice” is a sub group inside “Ciencia Ficción ES” and “Facsímiles Francés” from “Jules Verne”.

In previous captures folders have “indexed” icon, but they are not indexed as a) original folders do no exists anymore, and, as shown in last capture, “Indexados” is a smart group filtering indexed and “Sin Indexar” those marked as “Item is not Indexed”.

Closing and opening both DT instances do no solve it. Verify and repair does not report any error, and optimise does its job. DT 3.7.2 under Big Sur 11.4 in MacBook Air and same in my Intel iMac. 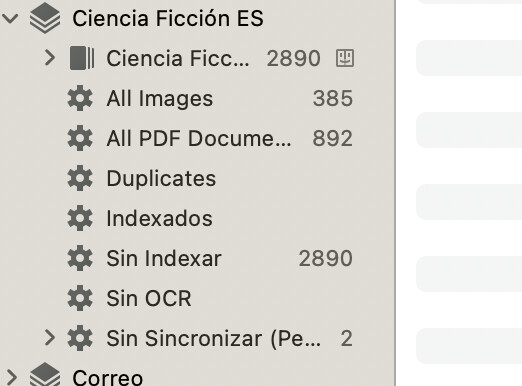 Those folders were marked as still indexed in original database in iMac. Only the folder. As in this thread: (Ok, now I’m not able to find the thread, not even in my Mac Safari History, not in a search here for visited items. There was a thread of 2 messages with the answer to remove the path in old DT2 “Show Info” menu option, that is “Get Info” in DT3).

However, I could not remove the path from the folder. Then I recreated the original folder structure (only folder, not files into it) and selected “Move into database”. Folder was moved and deleted from original place. No data has been lost. Now all items are not pending.

Second, to remove the path inside metadata. I did to resolve the issue, not because I mistaken or something.

I moved into database an indexed file hierarchy. By some reason, two folders (only the folders) were marked as still indexed. All contained files were into database, with the same folders still marked as indexed. I had to manually remove those two empty folders from origin because DT didn’t. I synchronized into a new WebDAV sync folder/database.

I didn’t noticed that those folders were marked as indexed in DB with the finder icon. I continued with my life. Then I reseted DT in my second Mac closing it and deleting all local databases and setting the new store. Then synchronized. As I have some safeguards in my databases (like a TOC adding number of items in each Group/Folder, not synchronized items smart group, and total amount of indexed and not indexed files smart groups), my second Mac detected some not yet synchronized stuff, as shown in the first message.

I did the normal I use to do in those cases, like “Synchronize”, “Update Indexed Items”, “Verify and repair”. Nothing resolved the issue. This was the moment I wrote here my message as I didn’t found anything here about that except a message from DT2 I didn’t pay much attention.

However, as I’m a little bit TOC (some people use to call me rfog the bulldog because my stubbornness), my mind was connecting wires. Then I looked into original database and found the indexed icon as well, and “Get Info” showed a path in those folders.

From originally moved into database DT instance, I exported the DB in case of disaster, recreate the two offending folders in original path(empty, no files into them) and… right click in one of them and “Move into database”. E voila! Finder icon disappeared, path was removed from folder info and original folders were deleted. I was worried if I moved into database an empty folder when same folder was in database, it could delete all files and folders inside, but it didn’t.

And I saw PUSH notifications in all of its magic! I had my second Mac open and showing DT Smart Group with the offending folders, and seconds after I did the move in the other Mac, the folders disappeared from my second Mac Smart Group!!! Considering my network and NAS (were WebDAV server is) speed, the reaction time was almost immediate.

As summary, on moving into database two folders weren’t deleted from original path and they were still marked as indexed.

Now I know in that case, a second move into database should resolve this kind of issue without losing any data.

Why those folders weren’t imported. Jobs know. I think APFS still has some tiny bugs.