Example: my MBP device is lite on storage, so would be useful to download what I need from services like WebDav, iCloud, Dropbox etc and also have the option for network shares.

We adovcate putting your databases on a connected external drive if you’re running low on space on your internal drive.

Development could comment further but I’d say a shallow sync in DEVONthink is not likely to happen. It was made for devices having much more limited storage, e.g., 16GB, etc.

The thing is: The database (all of it!) has to be somewhere. And as it currently stands, this “somewhere” does not include networked locations like the ones you mentioned. What you propose would work only if DT could and would permit storing databases in the cloud or on a WebDAV server.

But you could, as has been discussed here before, store your data on an external disk that’s connected to your MBP.

What you propose would work only if DT could and would permit storing databases in the cloud or on a WebDAV server.

Something not planned or intended.

Sorry perhaps I didn’t explain this very well. The database + meta is sync’ed on both e.g DT and WebDav then, I am talking about, the indexed files (content) being downloaded on demand. This works in DTTG without any issue, once files are synced then files can be purged or downloaded on demand. It’s this functionality I would like in DT that already exists DTTG

You lost me there. In my understanding, indexed files are outside the database anyway, like somewhere in the cloud or on a WebDAV server.

Especially in the latter case: why would you want to download them if you can access them anyway and they don’t take up space on your computer?

Because WebDAV can only be synced on DT. Where this works in DTTG. As mentioned DT can only sync to WebDAV you will always have a local copy as well. DT doesn’t allow you to index WebDAV, on demand or purge locally.

The aim is to be able download files I need , go off and use them on the Mac, sync and purge when I get back. However, if I am missing a file when out I can still download it remotely via the same WebDAV HTTPS using a custom certificate. Works fine on iPad via DTTG but needs the same features on DT for this to work the same.

You could mount the WebDAV share on your Mac like an AFS, SMB or NFS one. That permits you to access it without downloading. I believe.

I just tried it here with a WebDAV server on a Synology NAS, whose home directory is mounted on my Mac. No problem to index a single file from there into DT (and presumably that works for folders, too – I have no time to check that, too).

Yes you can do that with

On macOS then index files like a normal drive. But then you cannot do the same with iOS/iPadOS. Even if you could item paths would be different.

I seem to find solutions but every time I try to apply to both DT and DTTG one fails to work.

I think a VPN is the only solution at the moment using DT via SMB from NAS then DTTG via Bonjour but then I would have to leave the MBP on to use DTTG. I would like both devices to connect directly to NAS onsite and remotely to get files, then sync database which has all the metadata, tags etc. 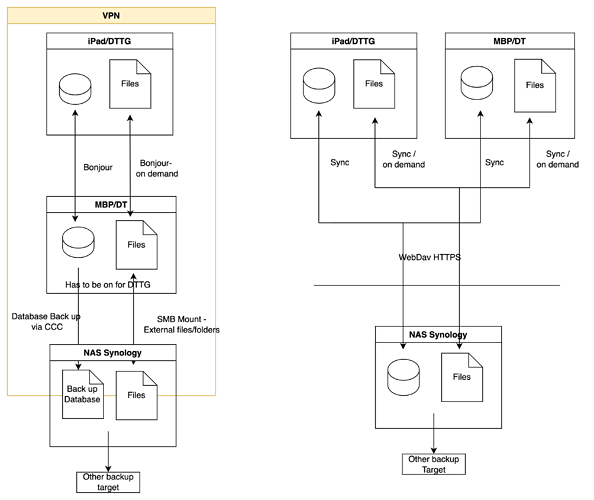 Even if you could item paths would be different.

Right. The iPad doesn’t have a normal file system. I don’t know if using Dropbox would help here in that they might provide the same path to files on all platforms through their App and/or API. OTOH, the URL to a file on a WebDAV server should be the same everywhere. But I guess that DT/TG can’t access the URL directly.