Get links from a url via script

I’m trying to get the astronomy image of the day from NASA, but I’m doing something wrong and I don’t know what.

(ignore the nonsense starting with “if(numLinks)…”, it is for debugging)

My code fails in the “get links of” with a big popup showing some kind of cannot convert "data ***3C216… " that seems base64 converted string.

If I omit the “download URL” statement, and use “get links of”, numLinks is set to 0.

Just replace “download URL” with “download markup from”. The following script might be useful too, it’s used by a daily reminder for a bookmark (https://apod.nasa.gov/apod/astropix.html) in one of my databases.

Wow! So easy when you know it!

I must be dumb over any possibilities, because still cannot put the image into a paragraph.

My current code to get the image is this:

I assume this return an image. Then, in the part of the code that inserts the image into the document, I have this:

What I get is a big rtf with the binary content of the image. I tried some things found in internet, but seems related to Pages, because does nothing in the RTF document or the script fails at compile time.

I assume this return an image.

You should see this in the Replies section of Script Editor. Here’s a stripped down version of Criss’ code noting the replies… 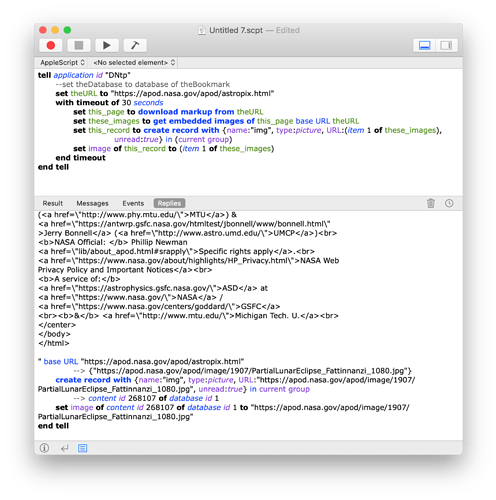 Didn’t knew that from script editor!!

Ok, tried with all my effort. Or I get printed the image url or nothing. This is my code and the “Replies” of the script editor. Same as Criss’ code but blank result. 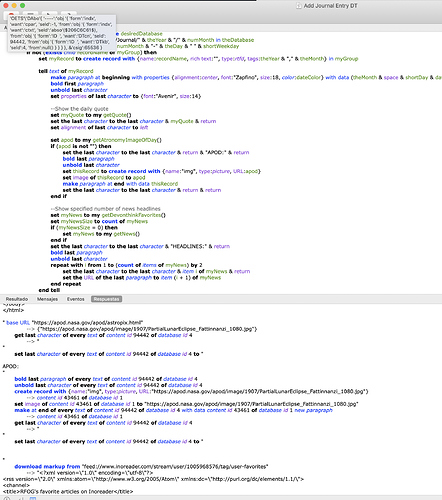 Correct. Criss’ script (and my subset) is not creating an RTF file or adding an image to one. It is downloading and creating a new image file from the image on the remote server.

PS: Scripting RTF(D) files is not a simple thing. There have to be specific implementations, like DEVONthink’s bold and unbold, etc. or you have to try and mess with the code under-the-hood (not for the faint of heart).

Ok, then if there is no specific script commands, I will deal with that. I will generate the same file I want by hand and then inspect the internals and try to make it work.

At the end, if I do it, I will post here and add it to our journal script that is shared in other part of this forum.