I installed DevonThink Pro Office recently. Rarely have I used a piece of software that makes me so … happy. Combined with my new ScanSnap, I am like a kid in an ultra-nerdy amusement park.

Anyway, DevonThink is installed on my home desktop. I spend all day at an office using a computer for which I have very limited privileges. I cannot install anything or use file sharing services. However, over the course of my day, I frequently run across things I’d like to get into DevonThink at home, and I’m trying to figure out the best way to do that – and whether it is possible to do with an automated process.

My idea is to set up a gmail account for the purpose of receiving things I want to get into DevonThink. I can manually move those things into DevonThink when I am home at the end of the day. Would it be possible to automate that process, such that DT automatically pulls the contents of that email account into the global inbox when I launch DT in the evening?

Does anyone else have any suggestions on getting info into DevonThink under circumstances like mine?

Sorry if there’s an obvious solution – as I said, I’m new to this.

Are you permitted to used Dropbox at work? If so, then put the interesting stuff into a Dropbox folder that you import or index into DTPO when you get home. Or box.net. Or use Evernote and import with Veritrope’s excellent script. I think all these might be more workable than email.

Thanks for those suggestions. Unfortunately, I’m not able to use any application that requires anything at all to be installed on my computer, which includes Dropbox and Evernote I believe (and I am specifically blocked from accessing file-sharing sites in any event).

Given the constraints you laid out, looks like your email solution or a jump drive is your best best. It’s possible to email bookmarks, archives, PDFs, etc., to Evernote without having the Evernote client installed on your machine and without ever accessing Evernote web. You can then use the mentioned Veritrope scripts to import your Evernote stash to DT when you’re at home. No cost. All is explained at evernote.com.

I set up a mail rule to import every e-mail with DTPO in the subject line into DTPO. I’m not at my home computer right now and for the life of me I can’t remember what I did, but it works well.

How did you get the email into DTPO via a rule?

I set up a mail rule so when the subject contains DTPO, Mail runs the applescript “~/Library/Scripts/DEVONthink Pro/Mail Rule Action Import.app”

Here’s a screenshot. The box for the name of the applescript isn’t quite big enough, but you should get the idea. (I set the color to blue so it stands out visually for me, but you don’t need to do that): 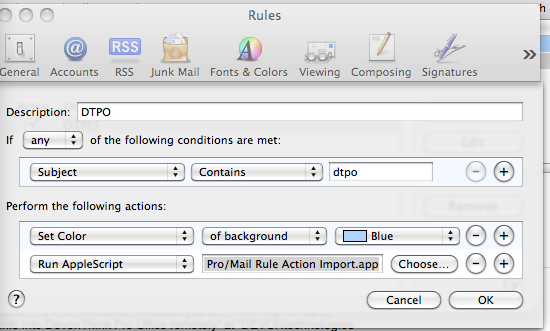 I also have a mail rule which runs an applescript that strips attachments from certain people and puts them into a specific folder. I then use Hazel (from Noodlesoft), which watches the content of that particular folder for any new documents, at which point it copies them to another folder which is set to sync with my iPad using iAnnotate.

Could probably change this last bit to import into DTPO, perhaps?

For the applescript mentioned above, check out – from screencastsonline.com/forums/cgi … 1273826927

Could probably change this last bit to import into DTPO, perhaps?

Apply the Import folder action to that folder and the attachments will be imported to DTPO. (These folder actions are installed into ~/Library/Scripts/Folder Actions from the Help > Install Add-Ons… menu).

Or, customize that script and add a Hazel step to run it at the same time so that Hazel adds the new material to your iPad sync folder.

I’ve been trying to solve this problem for a while, not using Mac Mail.app, and just found a way to get text emails into DTPO when I’m remote (which is what I usually want, often emailing a URL from some service I’m reading on my iPad).

It involves using IFTTT.com, DropBox.com and Automator on my Mac…but its really rather simple.

I got this idea and the recipe from goo.gl/ibw1O. That recipe prints files that show up in the DropBox folder, so it requires a bit of tweaking the Automator action. Instead of choosing the “Utilities” category in Automator, choose “Files and Folders”, then drag the “Move file” action into the script. Tell it to watch the DropBox folder you create, and to transfer to /Library/Application Support/DEVONthink Pro 2/Inbox (verify path), and you’re all set.

Edit (a few weeks later): Strike that suggestion Dropbox sync will eventually destroy the functionality of the Inbox if you do what I suggested and it will be necessary to take steps to restore the Inbox’s function.