Getting Set Up Right the First Time

I read the First Time thread, searched and read threads related to “server,” and read the manual and the Field Guide. I think I know what to do but I really want to get this right the first time, so I’m hoping to hear from someone who has a similar setup and can fill me in on tips and gotchas.

I don’t see any inherent issue using the Mini where it’s at.

Regarding sync…
There is a forum post on syncing: Sync Types Explained
There is also one specifically about Bonjour: Bonjour Simplified

Sync is covered in the Help for each application:

Is your co-worker running a Mac?

No. PC user, unfortunately. I bought the Server edition so that he can access via his web browser. He’ll need to be able to create/take notes. View/edit existing notes. Add PDFs.

Excellent. I was hoping to have another purpose for this Mini. It’s highly under utilized.

Yes, thanks. I read all those things. As I mentioned in my post, I was checking to see if anyone with a similar setup would have an opinion about experiential tips or gotchas from a similar setup. I’d excluded Bonjour as an option because my laptop is frequently not at home and I’d want it to sync no matter where I am. Let me know if I’ve got that wrong!

If you don’t answer these questions with yes, you should be fine with Bonjour.

Otherwise, I’d go for any sync service but iCloud. The thing is plagued by errors, as you can easily see by the many threads regarding iCloud sync problems here. WebDAV is fairly reliable, for example.

Yes. I work at client sites quite a bit. I want to take meeting notes while I’m there and occasionally import PDFs or other content while I’m using my laptop at their offices. I will want to be able to have my co-worker review those (meeting notes, etc.) without depending on me to arrive back home.

Yes. I want my coworker to be able to take notes at client meetings (using the web app) and I’d like to be able to review those in the evenings in my hotel room.

Otherwise, I’d go for any sync service but iCloud. The thing is plagued by errors, as you can easily see by the many threads regarding iCloud sync problems here. WebDAV is fairly reliable, for example.

This is exactly the kind of help I was looking for. I have a Dropbox account, so my inclination would be to go that route unless you find WebDAV to be a significant improvement.

You are correct that Bonjour is only usable on a local network.

I know @rkaplan is using the Server edition in a multi-user environment. Perhaps he’ll weigh in with his experience.

Yes I have used DT3 in a mulit-user environment for several years. I have a staff of 5 who work from home much of the time; my professional consulting practice requires that I review and annotate large data sets which my staff organizes and uploads for me.

I have not found Bonjour to be helpful in my situation because it does not allow multiple simultaneous connections (a problem if I am trying to sync my desktop, laptop, and iPhone simultaneously) and in any event it only works over a local network.

As @chrillek notes, there are issues with a number of the cloud-based syncing services. For a while I used Dropbox, then I gave up and switched to CloudMe when Dropbox had errors that were too random to reproduce but too frequent to make it usable, then I gave up Dropbox and used iCloud when DevonTech switched to a different iCloud sync architecture. Each had its issues.

The configuration which was life-altering in terms of being able to rely on DT3 working 24/7 was setting up WebDAV on a Synology NAS. It just works and is bulletproof even in recovering from occasional power failures which exceed the capacity of my UPS battery.

Related to that - I would strongly suggest that you set up two Macs running DT3 server 24/7, ideally in different locations such as home vs office. They do not need to be high-powered Macs - an older generation Mac Mini or MacBook or iMac are fine as long as they are connected at a decent Internet speed. Then sync both DT3 servers to your NAS drive and let your staff or coworkers know that one of the servers is the main DT3 sever and the other is a backup in case the first one becomes inoperative.

Such a setup with two DT3 servers (each in a different location) and a NAS running WebDAV turns out to be a cost-effetctive yet robust, redundant distributed network with high uptime and a very low chance of requiring maintenance while you are out of town or otherwise unavailable to maintain it. The amazing DevonTech magic is that your coworkers can effortlessly switch to the “backup” DT3 server if the main server goes down and then everything automatically syncs back up when you eventually get the main server back on-line. Honestly I do not know of any other database design on either Mac or Windows which allows such a degree of redundancy without gettting into much more sophisticated networking that would require professional networking staff to manage. I have no IT department; my business is too small for that.

At times I do “mission critical” work when out of town, such as participating in a Zoom deposition or Zoom trial testimony from a hotel which requires me to have access to my entire document database. Even though I have no tech-savvy staff back home, the combination of two DT3 servers back home plus the NAS drive has been totally bullet-proof so that I can be certain I am not going to have some technical failure back home which renders me unable to access essential documents. The cost need not be excessive - the two Macs running DT3 server can be fairly basic and any Synology model will support WebDAV. And your DT3 server license allows you to run a server on each computer on which it is installed.

The configuration which was life-altering in terms of being able to rely on DT3 working 24/7 was setting up WebDAV on a Synology NAS. It just works and is bulletproof even in recovering from occasional power failures which exceed the capacity of my UPS battery.

Real progress on account of all the help I’ve received, thank you!

I’ve now got the server set up on the Mac Mini and accessible internally and externally.
I’ve got sync set up through WebDEV.
I’ve made some test notes in the inbox and everything is sync’ing correctly.

The one thing that has me temporarily stumped is how to create new databases with local copies on both my machines, sync’ing through Webdev.

After reading the help info, I created a new DB on the Mac Mini - it shows up in the web interface.

I copied that DB from the Mac Mini to a USB drive (or network share) and imported into DT on my MacBook Pro. I thought this is what the instructions were telling me to do the first time so that they will sync moving forward. But that doesn’t seem to work. Getting a local copy of the DB on the MacBook Pro that syncs (via webdev) to the Mac Mini (and vv) is much further along than I was yesterday. Back to the user guide…!

and imported into DT on my MacBook Pro.

Can you clarify what you did here?

Went to the Mac Mini, duplicated the DB, copied it to a network drive location that was shared with the MacBook Pro. Went to the MacBook Pro, clicked File “Open Database,” and opened it from the network share location. (I looked under “Import” first, but quickly realized that wasn’t the right approach…)

Then, scratched my head, clear that I’d done this incorrectly! Then I had to run to a meeting so I didn’t get to troubleshoot.

Just copy it to the drive then open it in DEVONthink on the second Mac.

Just copy it to the drive then open it in DEVONthink on the second Mac.

Something isn’t clicking my brain, so I apologize that I’m not getting it.

Does the database have to be on a shared drive that is always accessible to both computers? I thought that’s what I was addressing with the webdav sync? When I take my laptop away from home, it won’t have access to that network drive. I know this is a me understanding problem, I just can’t see where…

Does the database have to be on a shared drive that is always accessible to both computers?

No, and DEVONthink databases are not made for simultaneous user access like this.
As @rkaplan correctly pointed out, each machine has a local copy of the data.

I thought that’s what I was addressing with the webdav sync?

As noted in many places, sync isn’t creating a copy of your database. It’s raw sync data about the databases used by DEVONthink and DEVONthink To Go.

In a decentralized system, each device has a local copy but can sync to a commonly accessible location, in your case via WebDAV.

Okay, good. This is what I understood from the reading.

But (idiot mode), I’m still not clear on how to get the local copy on each machine without duplicating/copying the file? And once I do, how do I “tell” DT that this is a DB meant to be sync’d with another DB of the same name on a different machine?

I promise it’s not a lack of reading. It’s just a lack of comprehension. (I know that doesn’t make it feel any better for people who have had to explain this 1000 times to noobs…)

From the Help > Documentation > In & Out > Sync > Sync Simplified…

Is that unclear somehow?

Well, since you asked so nicely. Yes. It’s unclear, somehow. Frankly, any “Help” document that feels the need to include “incredibly simple concept” misses the mark from the start. But I digress.

“From the machine with the database, you upload the database to a sync location accessible from both machines.”

Upload? Okay, that’s something you do to the internet or another remote server. The earlier instructions you provided were “Don’t duplicate the database. Just copy it to the drive then open it in DEVONthink on the second Mac.”

What is “copy” if not duplicating? I truly do not understand this distinction. And “upload.” Is that different from “copy”? Please help my simple mind understand since this is “so incredibly simple.”

I “sync” over Webdav. What do you mean by “sync location”? Do you mean the place I “uploaded” to? By copying without duplicating?

And “import the database.” Okay. I go to the Devonthink “File” menu, and find “Import.” I look in that list and there’s no “database” option there. I can import bookmarks, images, mailboxes, websites…but I don’t see “database.” But I’m supposed to import a database somehow. It’s “so incredibly simple” and definitely not unclear.

I don’t have a handy WebDav example, but here’s how I would do it using CloudKit. After creating the DB on the Mini, and setting up your WebDav location, go to DevonThink preferences on the MBP and set it up with WebDav sync there as well (Preferences > Sync.) Once you’ve set up your sync location, you can select your sync method in the column:

You’ll see remote databases populate on the right (may have to hit the refresh arrow–not sure.) Remote databases are the ones that are inside your sync method but not on this machine yet.

Right-click on the remote database and import: 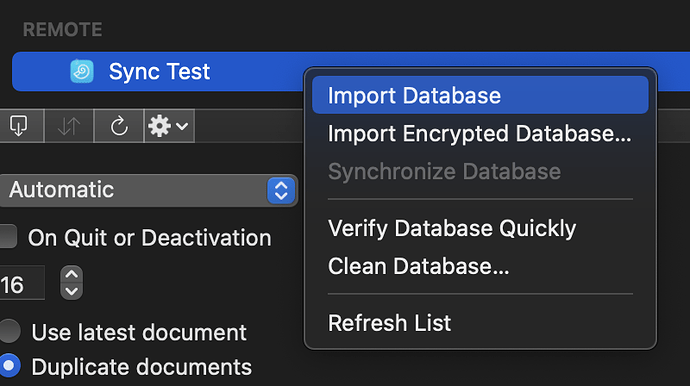 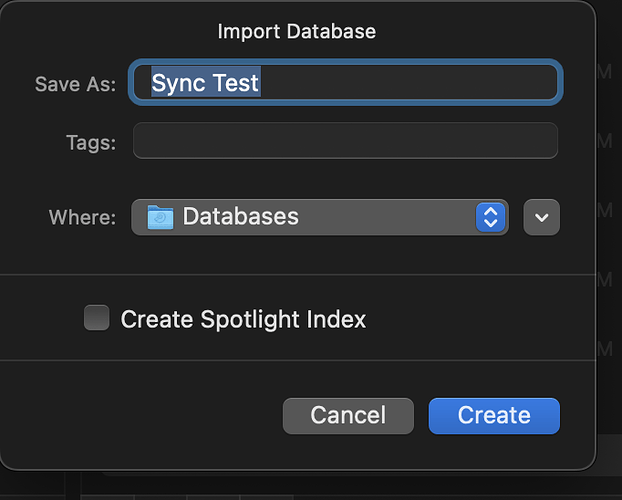 Then it’ll show up as one of your local databases and will be in your local filesystem: