After the new DTTG update, that supposedly was meant to fix a problem with “Ghost documets” (of which there is no information anywhere) that I evidently have several of (what happened to my documents?) but no idea how to fix (there is no information to find about this), Im now told that my database fails and needs repair when I try to sync. What do I do? How to I repair my database? Why does my iCloud-sync-setting say “(Legacy)” in the settings?

Im so confused, and need my database to work. Any help?

Heres a screenshot of the error-message that showed up today. I swithed from Dropbox to iCloud to fix sync-issues and it has been working for months. But after the last update, its back to not working again… 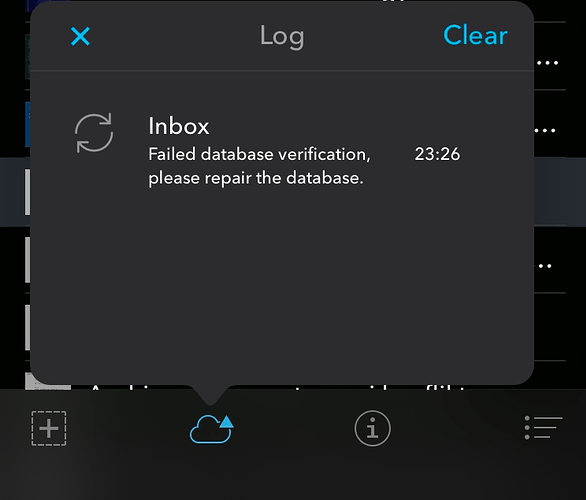 Long-press the trash icon and empty the trash.

Did nothing. Still says “Failed database verification” when attempting to sync

Can you explain what all the Ghost-documents-fuzz is about? Why are so many of my documents broken? It would be very smart of you to make an official statement as to what this is, and how to fix it. This is just confusing and worrying; Can I trust DT to store my files, when they suddenly can end up like this?

This was discussed here…

After upgrading from DEVONthink To Go 2 to version 3 some customers experienced empty or broken documents. This affected seemingly randomly selected documents from PDFs to web archives and images. Unfortunately, in our months-long beta test this problem did not surface or wasn’t reported (or we wouldn’t have released the app). We still have not located the root cause of this effect but firmly believe that it is caused by an issue in earlier versions of DEVONthink To Go 2. It propagated through …

Did you uninstall DEVONthink To Go 2?

Just read it. I deleted all the ghost-files, and emptied the trash. Seem to have fixed the sync, but I guess I’ve lost the documents?

I have not uninstalled DTTG 2.

Did you check if the files in question are in version 2?

but I guess I’ve lost the documents?

Have you actually? Are they not still present on whichever other device you sync to (to achieve that is actually why sync didn’t proceed)? Else, can you not restore them from a backup?

And just to be sure: you have installed DTTG 3.0.3? Had you installed a previous version of 3 before that?

Turn off syncing in DTTG2. Rename the DB on your Mac DEVONthink, close it, and rename the DB in finder. Quit Mac DEVON, then reopen it. Make a new DB on your Mac by telling it to sync down from DTTG2 as though it’s a new database. You’ll at least have your documents back where they were and you tidy up the zero-byte files in the later DB.

I put some notes about my own experience here:

How to resync everything from an iPhone to iPad/mac? DEVONthink

I managed to get nearly everything back, and could recover the few damaged files from elsewhere. CloudKit sync also seems to be working for me now as well.

(of which there is no information anywhere)

The forum is full of posts about it. You find the search function by clicking on the magnifying glass in the upper right corner.

I found it, eventually.

Thanks for the suggestion. There where about 20 documents in my Ghost-smartgroup, and it seems Im able to find them in my DTTG 2. I guess its easier for me to just export them, rather than renaming and creating a new database etc. Unless there is another reason to do what you suggest other than getting my files back?

Can I ask again - do you have 3.0.3 installed? That version is designed to extract the defective files from 2 and put them in 3 automatically; there will be conditions attached, so maybe it doesn’t work in every case.

The advantage of doing as @davem suggested is that you would have a backup of your 2.x files. Current thinking is that once the defect has been dealt with once, no further problems will occur. But having an additional backup wouldn’t hurt

Yes, I have the latest update. But nothing happened automatically. Unless I was supposed to open 2 before I deleted the ghost-files (and emptied the trash bin, to solve the sync issues)?

A backup certainly wouldn’t hurt. But would rather do that on my desktop, and not mess about with my databases and resyncing all my thousand of documents between my devices, as it takes so much time. Good to know that it shouldn’t happen again; although I’ve certainly lost faith in the reliability of DT. I do have local backups of my databases, but some of the ghost-files are newer than my latest backup…