Starting today, I am unable to move an item out of the global inbox 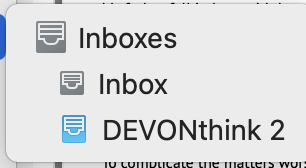 Please provide more information on this issue, including a less cropped screen capture.

I should be able to provide a screen capture later but first let me try to better explain. The two things I recently placed into the global inbox are locked in there and can’t be acted on though I can otherwise use them, An attempt to move an item from global inbox to Favorites was unsuccessful however I was able to move the inbox itself (with its 2 items) into Favorites.
In a subsequent screen capture what would you like for me to include as there’s one item in particular that I’d like to exclude.
I just unchecked unify inboxes and now I can move to Favorites but the only place showing as a target to have something move to is Inbox.
Verify shows Found 588 inconsistencies, 0 invalid filenames, 0 missing and 0 orphaned files.
Destinations other than Inbox just aren’t showing as options.
Now I’m unable to enter new data except as a twitter feed.
UPDATE: Ran a thorough rebuild and things seem back to normal.