With a newly installed DTP Office 2.0pb8 on Mac OS X 10.5.8, I am trying to import Mail from Thunderbird. It is in several accounts, with a 4-level deep folder hierarchy in one of the accounts. I couldn’t get DTP Office to recognize any mail folder, so I started to do it mailbox by mailbox (File>Import>Email… select “Inbox” and group by thread). There were over 22000 messages, most of them Junk (which Thunderbird had previously identified as Junk, so I don’t know why they were in “Inbox” in the first place).

I started to delete the “Junk” threads, but I had to look at some of them to determine whether they were junk. I noticed that some of them had more than one sender and subject line, so shouldn’t be part of the thread. But on looking at the actual messages, I found that many, but not all, of the odd messages actually did belong in the thread. I attach a screenshot of an example, showing a selected message that belongs in the thread called “Control” in the left column listing (not shown), though the displayed subject line is from a quite different message thread.

Is this a known problem that I should do something to fix, or have I simply done something silly? Or, is it a bug (I hope that’s not the answer). 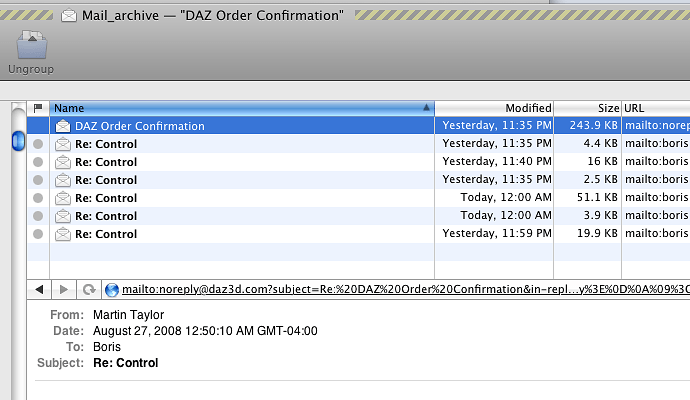 The threading support is based on the old Netscape 3 algorithm which is still considered the best one by many.
There are so many different definitions of Junk flags that we can’t support them all since a lot of them seem to be mail client specific. And since we don’t have “rich” support for Thunderbird since it doesn’t have an AppleScript interface, we can only determine the Junk status based on the flags in the mail headers. If Thunderbirds keeps those in a separate database, we don’t have access to it.

The “junk” issue comes up because, since I can’t rely on the message being what the one-liner says it is, I have to read all 22,000 messages I imported in order to assess which threads really are junk. If I could simply trash all the threads with an obvious junk subject line (and I know a lot of them! ), I could save almost half the work.