How can Applescripts in Smart Rules access the path of watched group?

I’m doing more with Smart Rules - they are very handy!

Often I use Smart Rules executing an embedded Applescript. In this Applescript it would be super-cool if I knew the path of the group this Smart Rule is searching in. (This is the group you select at the top of the Smart Rule underneath the rule name.)

Is it possible to find out this path in the Applescript?

This isn’t possible. What exactly do you have in mind?

Fair enough. It would be just convenient in my two use cases:

What exactly do you have in mind?

I can’t remember what exactly it was, however I also had a situation where I liked to access the search group from within a Smart Rule script. Wasn’t possible so I gave up on this one.

I don’t quite follow what you’re after but since you’re targeting a specific group, the matches are all children of that target group. If that’s the case, something like this would detect the parent. 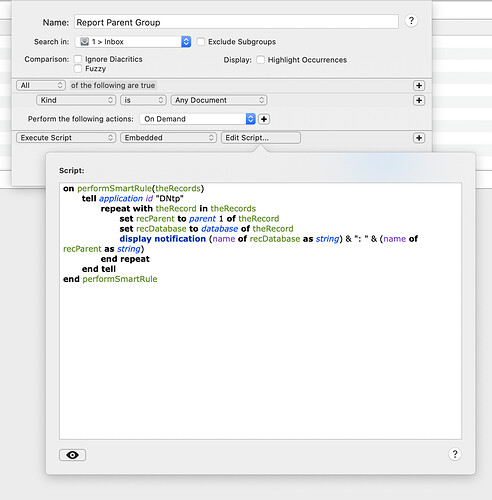 since you’re targeting a specific group, the matches are all children of that target group. If that’s the case, something like this would detect the parent.

Yes, I’m aware of this so one has to be thoughtful if they are using replicants.

No, seriously I don’t understand what you’re doing there. How does that help to find the group the Smart Rule is searching in? Or isn’t that what it should do?

As I said, if a specific group is being targeted then every matched item is a child of that group. That means the item’s location includes the target group.

Getting the parent of the matched item should be sufficient if there are no replicants involved.

And since the location doesn’t contain the name of the group, I string them together with a trailing slash to compare with theRecord’s location.

This is pretty smart, Jim! Thanks.