How can I convert a link/bookmark to a webarchive?

The script "Convert to Webarchive doesn’t work anymore in DTPO.

How can I loa a webarchive in the database?

I think that’s a v1-only script.

You can use Capture Web Archive, found (only) under the contextual menu in view panes and windows of Bookmark, HTML, and Web Archive document types: 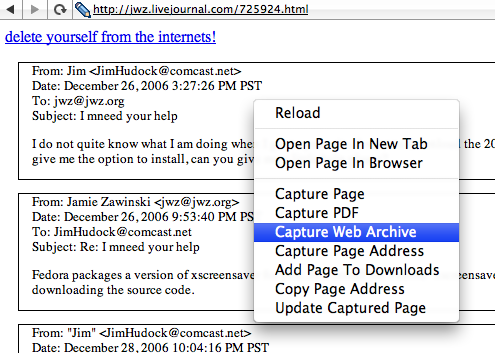 I’ve never understand why that and other capture commands in the CM aren’t also under a Data > Capture menu, making it easy to assign them keyboard shortcuts.

capture commands in the CM aren’t also under a Data > Capture menu,

If you go to the Scripting thread, somebody posted an update to the Capture As Webarchive script. Also, I took that update and redid the Batch Convert Links script: