How to Increment the Filename in Scansnap Manager?

Where do I have access to the »serial number« with which Scansnap Manager 3.2L90 starts the numbering of further scans? 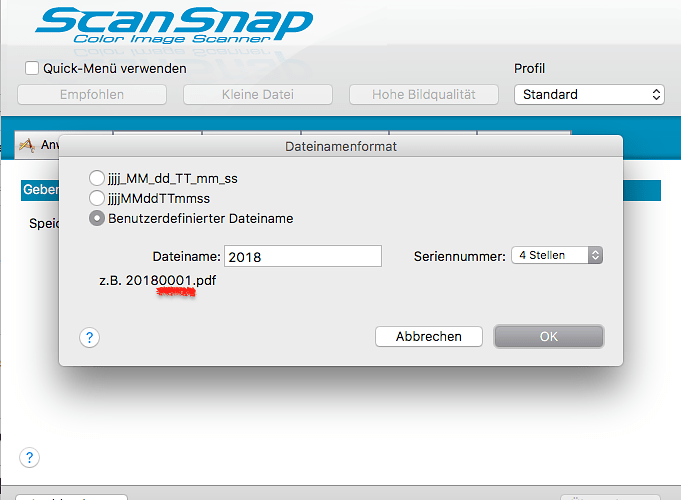 The four underlined digits must start with 0221. And from next scan on, the number must be increased by one for each scan.

This would be a question for Fujitsu as we have no control over this software.

EDIT 2018-09-26: Needed it again myself and copied the code to a terminal on a new Mac: Seems that this only works if you install bash 4 on your system (using Homebrew) and start it from there. With bash 3, which still is installed on Mojave, the leading zeros will not be written.

After that and restarting terminal/iterm everything works as expected

Unfortunately, Fujitsu doesn’t provide support for this, and they implemented their file naming much more intelligent than one wants it to be: If you have a folder and put a file named 20180220.pdf in, the next file will be 20180001.pdf. You literally have to create 220 properly named PDF files in that folder to fool the ScanSnap Software …

To do this in less than a second, open iTerm, go to your destination folder and execute this:

That should save you some time