How to Kill a Rule Running?

I have a rule which has been in place (successfully) for months. Duplicates to another db an item based on the value of a label. For unknown reasons which I’ll debug later, the rule decided to keep running over and over.

How to kill a rule that keeps running? I tried ctrl-d, ctrl-c, etc. I ended up quitting DEVONthink and it stopped.

I looked around here and in the manual and didn’t spot an answer.

Rules can’t be stopped as rules should run without user interaction ideally and are performed usually within a fraction of a second. Does the rule use a script?

No scripts. Not sure I can replicate, but will look further tomorrow when I return to Global HQ. Meantime, here is the script. Happy to hear if better action settings appropriate. I set it up a while ago and never went back as it “just worked”. I’ll remove the “after sync” as it’s probably unnecessary and might be the cause.

I was able to quit DEVONthink but not before ~100 duplicates created. 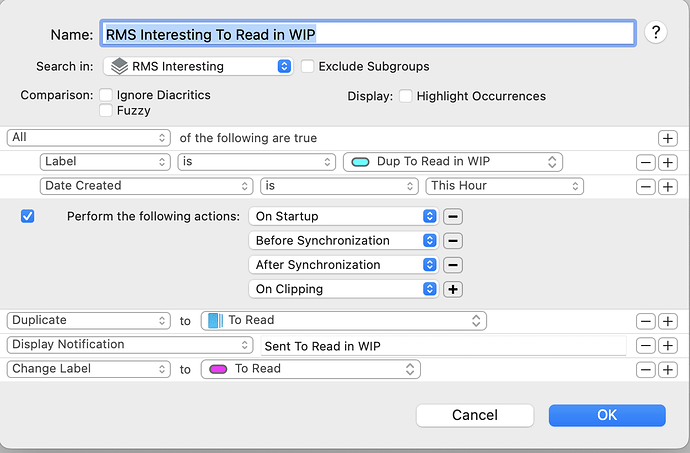 Changing the label before duplicating should fix this. Assuming that the destination is in the same search scope, then the copy currently has still the original label, meaning that the same items will be processed again and again.

thanks. Yes, that makes good sense. I guess I got away with it for a while.

(Seems like a prudent thing ought to be for a kill switch … always a chance that rules can run-away).

Deactivating the actions of the rule via the contextual menu of the sidebar should be sufficient. Or was the app frozen?

I did not think of that way to stop it. DEVONthink clearly not frozen. Very busy! was just alarmed to see it running away so did what i first thought of. as i have changed the rule i am unlikely to see the issue again on that rule. thanks.