How to move/export documents to DEVONthink

Hi everybody,
I have DEVONthink in place on my Mac and my iOS devices and use WEBDav sync on my Synology.
On my Synology I run a cron job producing PDF documents every 15 min by web crawling with Node-Red.
Now I would like to send/export these to the DEVONthink Inbox. I know how to manage import while DEVONthink is the active part, but how to initiate this from my Node-Red environment on Synology.
In Omnifocus, for example, there is a possibility to send an email, which initiates a new task.
Any ideas about that???

If DEVONthink is running, and you put file(s) in the designated Global Inbox folder, then DEVONthink will pull those documents in. So the main control to get doc’s there is from these other apps. DEVONthink will just react when it sees something. The in DEVONthink you could write some rules which detects the new files then does things with them (up to you).

… sorry, forget to mention that. My Mac is not running all the time, e.g. during the night. But it would be sufficient, if these “import requests” are processed by DEVONthink or DTTG when I open them …
Something like the integrated RSS reader would be nice …

Have you tried it yet? Did you notice yet what happens when you open DEVONthink in the morning?

… Not tried yet. How can I “put files in the Global Inbox folder”, when my Mac is offline?

Put the files in Dropbox, file server folder, folder on the webdev machine, then in a.m. have a routine initiated by (you, Hazel, scheduled cron job) that moves the files into the inbox folder. Experiment with using a symbolic link? Or experiment with indexing the folder in DEVONthink pointing to the folder where the files are, and update the index, moving what you want, etc. Lots of ways.

… the most convinient way would be to move the file(s) to the inbox on my Synology. But this at least is not working …
… maybe I try x-callback-url … 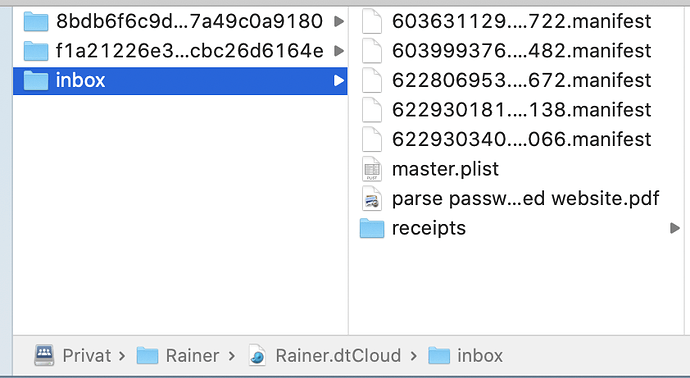 … the most convinient way would be to move the file(s) to the inbox on my Synology. But this at least is not working …
… maybe I try x-callback-url …

This is a sync store which should never be modified. The path of the inbox folder is ~/Library/Application Support/DEVONthink 3/Inbox.

… ah, okay. Thanks for this …
… is there any possibility to move documents from a folder of my Synology to the DEVONthink database WITHOUT initiating/starting this from Mac???

You could set up an rsync job on you NAS that copies stuff to a well-known location on your Mac. The Mac can then run a folder action to move the files into DEVONthink.
In any case, as @cgrunenberg said, do not move anything directly into the .dtbase folder. That most probably breaks the database.

… got it. The thing is: sometimes I am on business trip and have only my iPad with me. Then the process will not work because - as far as I understood - it needs ALWAYS the Mac to import the data in DEVONthink…

you can with the ideas above make the Mac to work when you turn it on after returning from the trip.

I see. It is now clear to me that without a Mac there will be no update of the database. As I “only” own an iMac I will not be able to get documents from my Synology when being for a week or so on business trip.
Well, I could setup a workflow where my NAS sends every web scraped document via email - which I then could somehow import with DTTG on my iPad. But this is a bit cumbersome.

But it would be sufficient, if these “import requests” are processed by DEVONthink or DTTG when I open them …

They do if they have access to an active and reachable sync location.

Why do you need the Mac to be updated while you’re away? Do you have an assistant, colleague, or significant other accessing the Mac?

Actually I have three devices playing a role in that game:

What I want to achieve: whenever I open iMac OR iPad, I would like to see in my inbox the documents which have been put together by my NAS.

Isn’t that what “connect with server” in the finder and the files app on the iPad are for? Map your “inbox” to the relevant folder on the NAS and that’s it.
Basically, you treat your NAS as a sink for files. If you want to work with them (as opposed to just store them), an application has to access them. That’s either your iPad or your Mac or both. This app has to run, it has to have access to the NAS. There will be no instantaneous appearance of documents in DT, unless you keep your Mac running all the time and processing the files from the NAS.

Map your “inbox” to the relevant folder on the NAS and that’s it.

Yes, I think that might be the solution. I just checked the property settings of the database as well as the DT settings … Where and how can I change this mapping?
cgrunenberg already mentioned that “the path of the inbox folder is ~/Library/Application Support/DEVONthink 3/Inbox”

You can’t map it as the term is used in Windows.
I believe @chrillek was suggesting indexing the folder on the NAS. This is covered in DEVONthink’s Help > Documentation > In & Out > Importing & Indexing. Make sure to read the entire section to be aware of the integration with the file system.

… yep. If this works also for DTTG then I have the solution I was looking for. I will try …