After taking a break from Devonthink (because of working in a multi-OS environment) I am back to using beta 2 of version 3.0. Everything is working smoothly except for sync to DTTG. I am syncing via iCloud and everything appears fine when I set it up on my iPad and iPhone. No error messages. The Global Inbox syncs fine as well. Problem is that I do not see my other databases on the iPhone or iOS.

I have verified the databases in Devonthink (desktop), so the syncing appears to work fine on that end.

Could you please post a screenshot of Preferences > Sync on the Mac after selecting the iCloud sync location? Thanks! Please note that the initial sync might require some time as the data is uploaded by iCloud in the background.

Please see attached for screenshot. I did cross out the name for privacy reasons but assume that does not matter. 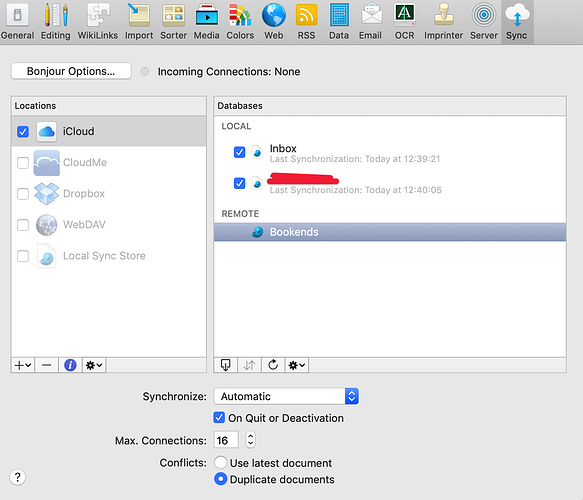 Just after posting this, I did see that the “red” (in the screenshot) synced database is now appearing in DTTG on the iPhone (but not the remote Bookends one). The database is showing as empty, however. This is about 2 hours after I set up the sync, and the database does not contain a ton of information (under 60 MB).

I should add that I am on a really wonky and slow internet connection, so maybe this is just a matter of a large amount of patience?

I should add that I am on a really wonky and slow internet connection, so maybe this is just a matter of a large amount of patience?

How slow is it actually?

It fluctuates quite a bit (I am in West Africa). Right now according to Ookla it is a staggering 2.6 Mbps (download) and a ping of 106 ms.

Are any issues logged on the Mac or on iOS? Is a verification of the sync store successfull (see contextual menu in Preferences > Sync)?

No issues on Mac and databases verify successful.

I did move to a more reliable/faster WiFi hotspot and now all databases appear on iOS, including groups for the “red” one above.

So all’s good, assume it was just due to to the inconsistent/slow Wi-Fi network?

Understood. Thanks and sorry for the “false alarm.”