Since the formatted notes DT creates when using the import from evernote function don’t allow for wikilinks, I want to somehow get my evernote stuff as RTF into DT. We are talking >10k notes here with several gigs, sometimes including PDF or whatever else. What would be the best and least manual labour including way to do this? I know there is a “convert to RTF” function for a single formatted note but that obviously doesn’t cut it

Maybe I should have made more clear that I simply assumed I am not the first with this problem. Sure, with a lot of tweaking, I might be able to write my own AppleScript. But it seemed like a more general thing to desire, so I asked. I did not find anything via search, but you never know…

One more thing in this context: the Data > Convert > RTF functionality introduces a lot of weird line breaks for me. In all the lists (either numbered or bullet) it creates an extra line break per line. And it also sets the font size to 12 although the font size in DT preferences for RTF etc is set to 14 and the font size of the formatted notes is also 14 (meaning they are shown in that size). What is happening here? 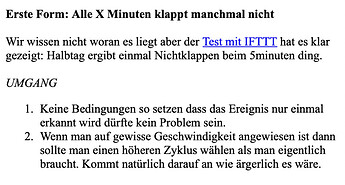 And it also sets the font size to 12 although the font size in DT preferences for RTF etc is set to 14 and the font size of the formatted notes is also 14 (meaning they are shown in that size). What is happening here?

The conversion is done by macOS’ WebKit engine, therefore it’s hard to tell whether this is the expected result or a bug.

Here is the full html of a one-line evernote-imported formatted note. it is shown as 14pt in DT, the setting for new RTF is 14pt and yet it is converted to 12pt. looks quite clean to my eyes.

and here an excerpt out of a one-line formatted note created in DT, where the conversions works just fine

so the formatted note from within DT hardcodes the font-size, whereas on evernote imports there is simply no font size set at all – which webkit(?) seems to display as 14pt and the converter seems to interpret as 12pt. If the converter is from webkit too, that feels like a bad implementation on apple’s part. or am i missing something?

practically speaking: my understanding is that I should write an AppleScript that converts to RTF and then changes font, font size etc. Does anyone have any similar AppleScripts lying around maybe? Otherwise I’ll start from scratch.

I see. 14pt was set there too, so that is why they are all displayed in 14pt but the converter does not care. And yes, all (or at least most of) my evernote notes had default font & font size within evernote and got imported via the evernote import tool which does import them like you see here: no font, no font size set. So there is no way around my own applescript seemingly.

You could use Markdown instead of RTF. In that case, you can specify font, font-size, colors and everything else in a CSS file. No need for Applescript.
On the downside, images might cause minor problems…

Thanks for the suggestion and indeed, it would be a nice way out of this mess. But I’ve been over that basically for a whole day and settled on RTF because I am a WYSIWYG guy and want to have WYSIWYG type editing within DT itself so that I still see context. The reason is that I tend to have many small notes (in which I still use outlining though, so not that small) rather than big ones so I am switching notes a lot when working. So external editor is no good option for me and therefore in order to have WYSIWYG, I need to go with something else then markdown. RTF is the answer for me then because of wikilink capability.