Perhaps I’m blind, since no one else seems to have asked about this… but where is the import-email item under File>Import? It was there in DTPO2.

That menu item is no longer there. It’s in the Import sidebar, covered in the built-in Help > Documentation > In & Out > Archiving Email and Windows > Sidebar: Email.

Thanks, Bluefrog. Found it.

Is it possible to somehow demo the Devon Think Pro 3 features (like importint email) with a DevonThink Pro 2 (upgraded to vanilla DT3) license?

I know there’s the preference to “show features of higher editions”, but when checked, it doesn’t let me actually use those features.

No. Standard doesn’t allow those things to operate.

And there’s no demo version available? I’m just curious how the email might work for me (but not $99 curious!).

There’s much more than mere email importing for the $99.

True, true. Hey, a suggestion: the editions page on the site should provide more detail about those extra Pro features. For example, I have no idea what “form views” refers to, and couldn’t find anything in the manual. 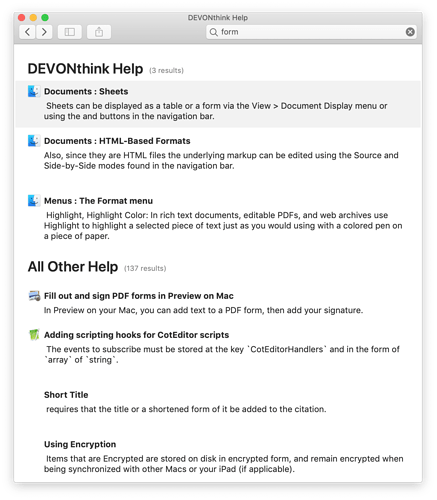 I too didn’t even notice the bar above “Favorites” with the “Import” icon, and as I’ve been trained by so many other apps to not bother with the built-in help, Google led me here. It all worked out in the end.

The real reason for this post is to say how much I prefer the new Import interface for Email. It was never clear with the previous interface if I had the right target folder lined up. So, great job on the new interface!

Welcome @sean
Thanks for the nice comments. It’s appreciated.

I hope this is a habit you’ll give up with DEVONthink. It’s a very handy reference and it’s also part of the beta testing.

When importing from mail or outlook , are the attachments included. Are there options allowing attachments

The attachments aren’t imported on their own as the emails contain them already. But version 3 indexes now the text of the attachments (e.g. PDF) contrary to version 2.