Inbox vs. Inbox - where they are but shouldn't be

My pet peeve about DEVONthink v3 must be the loss of the In Box.

I have several different databases open at any one time. Usually, the sidebar is hidden for lack of screen real estate (because the monitor is vertical). Because the In Boxes have been removed from the database structure sidebar and now reside under a single heading, they have become useless to me. All the content I had in the individual database In Box I have now put into the root structure because otherwise I can’t get at it. Oh yes - open the sidebar, open the in box and there it is… is not the solution.

I question the logic behind unifying the In Boxes for different databases under one heading in the sidebar. Typically, these inboxes have nothing to do with each other and everything to do with the database where they are in, so why unrelated items are put together in V3 where the system worked find in V2 previously is a mystery to me…… Unless it’s a major malfunction in the philosophy of the product.

It’d be fine to turn this feature OFF in the preferences so database In Boxes show up in their database, but unfortunately there isn’t one. Yet. I strongly encourage the developers to rethink this.

It’d be fine to turn this feature OFF in the preferences so database In Boxes show up in their database, but unfortunately there isn’t one. Yet. I strongly encourage the developers to rethink this.

I second this, Inboxes are less useful in v3 as it stands.

You can just create a smart group that shows all the contents of the database’s inbox. [59%20AM] The limitations of this are: you cannot drag files into a smart group a smart group cannot be unsorted (which is my default way to work).

Hi there, triggered by this thread and especially this post I’ve found the following setup, thanks @ngan! If you want to use a DEVONthink 3 database’s inbox inside the database part of the sidebar then that’s possible with a triggered script and/or a smart rule. Don’t be scared off by “script”, it’s easy to set up and there’s also a helper script that creates the necessary “fake” incoming group and attaches the trigger script. You don’t need to use the helper script it’s just for convenience,…

I’ve been making this same point for months now.

The smart group solution isn’t really a good solution at all. It’s a workaround to a problem that shouldn’t exist in the first place, and it comes with serious drawbacks.

So I’ve gone with creating smart groups pointing at the inbox and tags setting the first to kind > any document, second kind > tags. I think that might be fine as I don’t generally move anything into the Inboxes except from the Global Inbox, and Tags, it’s more of an overview of my tags I’m after. Have to see in use.

But again, rather than me needing to creating these for all my databases, it could be written into v3 so you just enable it via the preferences. I’ve also given them their own icons, which also show up in the side bar - joy for anyone who finds using colour helpful for navigating. 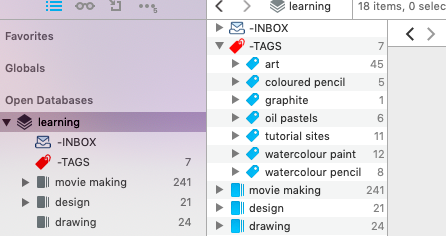