Indexed Files Moved Into Database: Odd Icon on Some Files

I just moved a few thousand indexed files into my DT database, and many that are annotated versions give me a cloud icon with 3 dots below it, as well as the icon saying it’s still indexed. The image says File Not Yet Available and there’s a Download button that’s grayed out. Finder shows the folder isn’t there, so why would it take a long time to make the file available? Meanwhile, the files happily uploaded to CloudKit and still the those missing files have not appeared. And yes, all of the files were available locally on my Mac.

So where did my files go? Thanks. 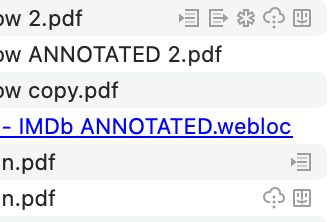 In which folder were these files initially located? The first PDF on the screenshot is probably the item successfully moved into the database, the second one a weird and obsolete relict which can be removed.

There are maybe 50 of the weird ones, scattered throughout the subfolders. Many are marked ANNOTATED, so those are the ones with my important notes I want back. Most of the weird ones have a second version with no annotations and without ANNOTATE appended to it title.

They were indexed from my hard drive (stored locally from Google drive). I recently changed from Dropbox to CloudKit, so my sync store is still intact in Dropbox. Not quite sure how to hook it up and look there for the missing files without screwing up the cloudkit version.

I’m about to move another few thousand files into my database, also stored locally in my Google drive folder. Is there a different way to do this?

And this may be related: I keep getting warnings in the log, as in the screenshot. 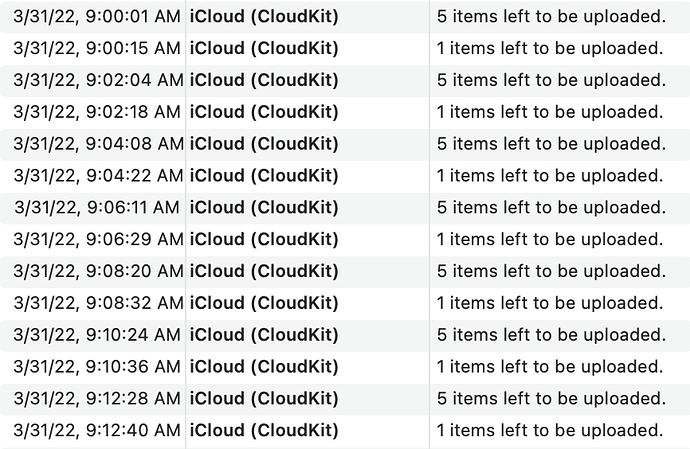 It is likely unrelated and also discussed elsewhere in the forums.

Do a toolbar search for ​item:pending​.

Actually it’s caused by pending or missing items, e.g. the ones having a cloud icon on the screenshot and therefore most likely related.

I meant unrelated to the moving of files into the database, though I perhaps misunderstood the comment.

Not sure what to do if a pending file is important. Is there a way to retrieve it?

I recently changed from Dropbox to CloudKit, so my sync store is still intact in Dropbox. Not quite sure how to hook it up and look there for the missing files without screwing up the cloudkit version.

Why did you switch from Dropbox to CloudKit?

I switched to CloudKit because I have an account there, only 10G in dropbox.

If I suspend syncing with CloudKit, re-enable Dropbox, will that lose the documents I’ve since changed/added to CloudKit?