Indexing right into the inbox

I have decided that indexing might actually be the better option for me to work with DTP and I really like that it basically has an auto-import/monitoring feature for indexing folders. But I wonder whether it’s possible to link a folder DIRECTLY to the inbox.
So far, when I index a folder it always pops up as a folder in the inbox, which I find disturbing because it is just additional clutter.

So my question is: Is it possible to have that remove that folder and effectively link the inbox directly to the indexed (and monitored) folder on my disk?

Indexed items are not copied to the database, but the database creates metadata about them, and retains Paths to their locations.

When you work in the database you are working within DEVONthink’s environment, not the Finder environment. You see the organizational structure of groups resulting from Index-capture of Finder folders. You may also create groups and documents that have no corresponding existence in the Finder. For example, captures from the Web directly to a database, scanner output sent to DEVONthink Pro Office for OCR, notes that are created within DEVONthink, etc. (While it is possible to keep a database entirely Indexed by moving non-Indexed items out to the Finder and Indexing them back to the database, that requires user action—I’ll confess my own preference is for Imported (self-contained) databases.)

The DEVONthink environment is much richer than the Finder environment. It includes, e.g., the Classify assistant (which I find more useful for non-Indexed content) to suggest filing location(s) based on an analysis of text content.

Indexed content is subject to being “lost” if the Finder counterpart is moved or renamed; that breaks the Path to a file or folder, so it becomes “missing” in the database. For that reason, I often recommend a hierarchical structure of the Finder folders and files to be Indexed, as renaming items or moving items that are within that hierarchy can be done, and the database can be updated by re-Indexing the top-level folder.

Thank you for your elaborate answer, Bill. But it did not really answer my rather simple question. All I wanted to know was whether it is possible to link the inbox directly to an indexed folder. Because if you work with indexed files and a counterpart to the (database) inbox in the finder (e.g. a single folder that works as a data “dump” and is then organized in DTP), it makes sense to do exactly that.

Let me illustrate it with two screenshots that I have attached: “Inbox with folder” is how it works when I index the “Test” folder. The screenshot “Inbox without folder” is basically what I am asking for/about: The test folder now is nothing but an inbox and the files – in this case the two files at the top – end up directly in the inbox (of course I did it manually for the screenshot).

Why would I even want to use indexed files instead of having them directly in the database? Actually: I don’t WANT it. BUT there are instances when I want to use other search engines like the Finder or Leap. Also the data seems sometimes easier to handle directly from the Finder (e.g. data for e-mail attachments) and imo Devonthink has a very poor integration of Tags, something that tools like Ammonite can only fix to a certain extent, and the search interface – even though powerful – seems clunky at times (e.g. no keyboard search parameters like in Evernote etc.). Thus indexing (or not using DTP) seems like the only choice. (Except maybe for having everything in a database AND the same structure exported to the finder) 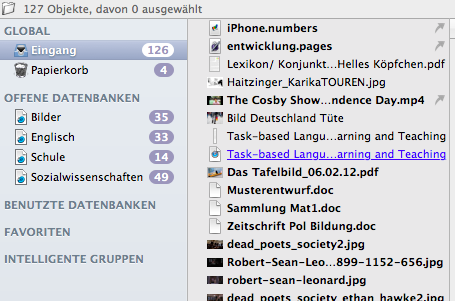 I am sure I will be corrected if I am wrong, but I always think of indexing as an alias, so in your case you would be outting an alias of the folder into Devonthink and therefore the folder will show up so, IMHO, the answer to your question is “No".

The answer is, as has already been mentioned, no.

I add documents to my databases, move them to the appropriate indexed group(s), then move them out of the database to the respective indexed folder in the Finder using the contextual menu in DEVONthink. I add documents to my databases, move them to the appropriate indexed group(s), then move them out of the database to the respective indexed folder in the Finder using the contextual menu in DEVONthink.

Can you elaborate on that a bit? What does it do? Does it then give you the same file-folder structure in the Finder that you have in DTP? I haven’t used that command yet, especially because I have just started using indexed files.