Hi there. I know that DTTG does not allow editing of RTF documents that include images. This is really an issue for me - is there any plan to fix this in upcoming versions?

I’m really trying hard to get used to DTTG, but I keep running into obstacles. Creating a note with images is a fairly routine thing for me. I had them on Evernote, Bear, and Apple Notes, and have imported everything to Devonthink, only to discover I can’t edit anything on my ipad.

I tried opening one of them in pages or word, but since they are package documents now, those apps can’t open them either, so I am forced to wait until I’m back at my laptop.

Am I missing something? This seems like a huge issue…

Evernote, Apple Notes, and Bear are not using rich text. The first two are using HTML and the last is using Markdown. Why aren’t they using rich text? Because rich text is not a mobile-native, nor mobile-friendly format and Apple does not consider it a first-class iOS format.

Rich text has to be supported by third-party frameworks, which are rare to find. We are looking for more suitable frameworks for the future but that is the current state of things.

OK - so has anyone figured out a workaround? Can I use another app for notes and have them all sync to Devonthink and DTTG? I need to be able to create notes (with images) on iOS or Mac and edit them in both places.

Thanks for your help… it’s really frustrating.

I use the formatted note document for this. It’s an HTML format.

Thanks Greg - can you edit a formatted note with images on DTTG?

I am using Devonthink for all my notetaking - I wonder if I shoud be using formatted notes instead of RTF as my default?

Yes, you can edit a formatted note in DEVONthink To Go.
Bear in mind, due to iOS memory requirements, there is a 10MB limit on the size of formatted notes.

How are you getting images for a document?

I just paste in images, often copied from a website or a screenshot of something I’m working on. Not huge images.

Are there any other downsides to using formatted notes? If I ever need to leave DT, can I open them in other apps?

They’re just HTML files, similar to what Evernote uses, so they’d be viewable in a browser.

As far as editability outside DEVONthink, that is not possible as far as I know.

I just tried a test formatted document. I am able to edit it on iOS but the font has changed from the desktop version and I am unable to see the images.

How about using another app for notes that would sync to Devonthink. Is that possible?

Or can I open a DTTG document in another app on iOS that can handle formatted documents, make edits, and have the edited version saved in DTTG?

Is that the same as “open in” on iOS? That would allow me to open the document in almost any app…

No. Open in is a mechanism of the Share menu.
The Document Provider is handled when an application has an option to select files through the Files.app.

Here is an example in the Documents app… 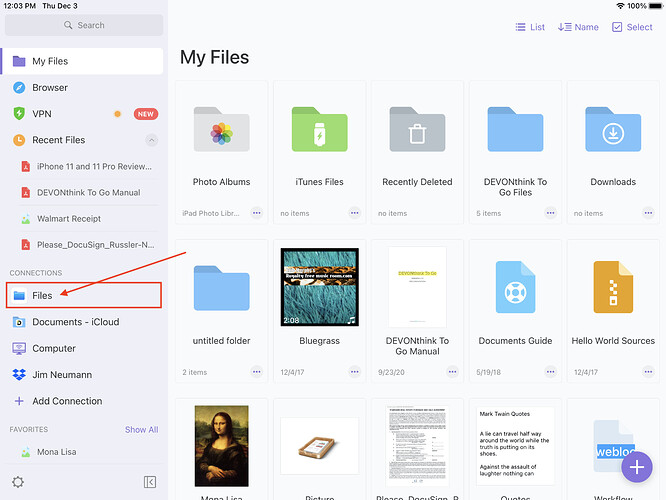 Here is one in PDF Viewer… 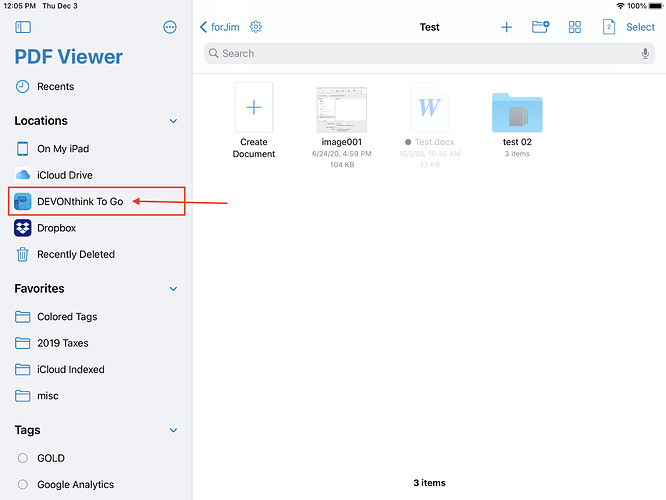 Ok so I was able to open a RTF document in Pages on iOS, but opening it created a duplicate copy in Pages format, so that’s not ideal.

Can you explain why I can’t see images on formatted notes while viewing on iOS?

Ok so I was able to open a RTF document in Pages on iOS, but opening it created a duplicate copy in Pages format, so that’s not ideal.

That is a function of Pages, not DEVONthink To Go. It also underscores (1) the proprietary nature of apps like Pages or Word that want to have files in their specific format (understandable to some degree), and (2) Apple doesn’t support RTF in iOS.

Can you explain why I can’t see images on formatted notes while viewing on iOS?

Not without seeing or inspecting a file.

OK - thanks for all the help. I guess I will try to avoid putting images in notes. It’s far from an ideal solution though. Hoping the DTTG developers can improve the situation someday so note editing can be more on par with Evernote (considering DT is far superior in everything except mobile).

You’re welcome and yes, we have more than enough to do in here… on all fronts.

PS: If you have images in Photos.app, you can insert them via the formatting popup… 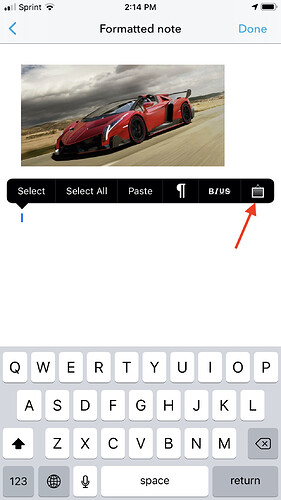 But again, be aware of the potential for the file size to grow quickly as the image data is embedded in the file, not linked.

as insight about a workflow you may wish to consider which eliminates fighting IOS.

i do not need this anymore but when i used my ipad for note taking (meetings, brainstorming, etc ) i used Notability. it does images but i never liked that the images would not flow with text. still that way. so i gave up and used Word or Pages and much happier with little friction.

when done with the note document (and i ended up with hundreds of files with one recent project) i put the pdf exported from wherever it was into DEVONthink. mostly used desktop version to move as its trivial to do. IOS has its own issues but can be done. i did not bother.

DEVONthink’s niche is holding documents, finding documents, categorising documents. documents generally mean finished things or mostly finished. after initial creation and polishing i rarely had to go back to the source document in what ever app it was in but if i needed to i could. at that point i might then make a new document. and on it goes.

Got it. Is it normal that if I insert an image in a formatted note on desktop, it’s not visible on iOS?

Thanks for the tips. I just did that - took notes in Goodnotes on the iPad and exported to Devonthink. The challenge comes for me when I have notes that I edit or continue to work on for weeks or months, so I would like to be able to edit them from anywhere. I suppose I can just avoid images in those types of documents.