I am using smart rules to move items out of my DT inbox based on tags, but after one of the smart rules has done its job the destination group contains a new subgroup named as the tag and what looks like a replicant of the item both inside and outside it (the original cannot be found anywhere else, so one has to be the original). What have I done wrong? I have copied another smart rule that does the same but for another tag and destination group, without any problem. The Database Properties are the same for the two destination groups. Please help!

A screenshof the smart rule would be useful, thanks.

This smart rule is not limited to documents, it’s possible that it processed a tag which was converted to a group after moving it.

P.S. The same problem has never occurred in the other smart rules that are fully analogous.

but I do not want it to create groups with the same name as the tag and replicants of the item every time it moves a tagged item. How do I fix it?

If you tag a file a replicant of the file will always be put in its appropriate tag group in the Tags group for the database. This is non-negotiable behavior and how tags work in DEVONthink.

You must have other smart rules involved as the one you posted a screen capture of would not create any new groups.

It is so strange. I only have two smart rules that I have made (plus only the built in filter duplicates and incoming scans). This problematic smart rule, and the analogous smart rule moving files into another group based on another tag (which works as it should). See screen shots. 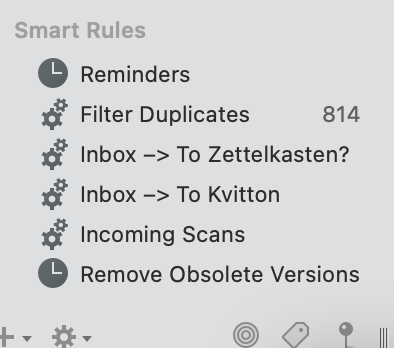 Dear @BLUEFROG and @cgrunenberg
After having exhausted every possibility, I went back to basics and simply removed the smart rule with the problem and created the same rule again. However, this time I did not start by duplicating the analogous but unproblematic smart rule, but started from scratch. This time the smart rule works without creating weird groups with replicants, as described above. I just thought that info could be useful for you, as it could perhaps indicate that something is going on when duplicating smart rules.

A screenshot of the new smart rule would be useful, thank you.

Sure! I just added OCR before moving, but it worked as expected before that too.

The smart rules are not identical, the old one moved items having the tag kvitto or (!) whose name contained “kvitto”. Therefore the tag kvitto was most likely moved too and converted to a group and this caused the replicants.

Ah, that makes sense. I am learning. Thanks for getting to the bottom of it.