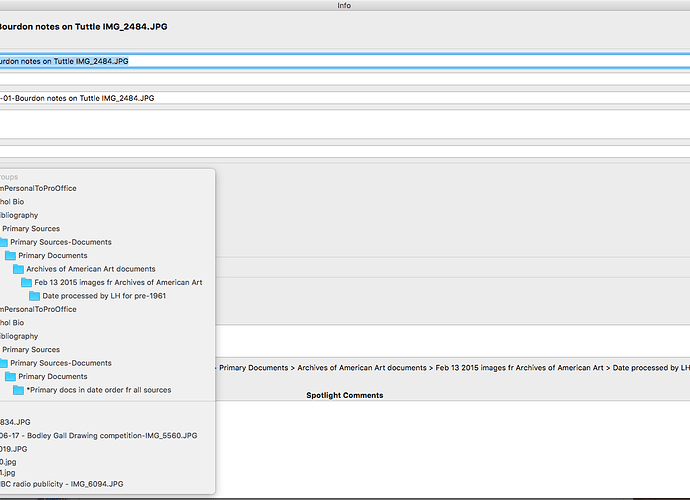 Sure hope someone can help me with a weird and scary problem:

After I replicate (not duplicate) a jpeg to a new group, DT Pro Office suddenly bolds its name as though it had become a duplicate, and then just as suddenly the actual content of the jpeg disappears and it becomes blank (even when opened in another program). Then, when I check the jpeg in “Get Info”, it shows it as a duplicate of half-a-dozen other totally different jpegs to which it bears no relationship at all … except that all of them have also gone blank! (I assume it reads them as duplicates because they all have the same non-content.) I’m uploading a screen grab (see above) of what the information panel shows for one of the files where this has happened – because there have been several that have similarly disappeared over recent days, and it has happened on two different computers! One is using Mac OS 10.11, the other is 10.11.4.
Luckily, I have been able to restore the original versions of the files from backups, but the problem is a terrible time-waster and one day I will find myself stuck without the right backup. HELP!

Without the data, it’s hard to troubleshoot this. Why not open a ticket with [i]Support[/i] and include a sample JPEG or two?

one day I will find myself stuck without the right backup

Not a good idea. Make sure you have backups always.

Thanks Korm – I’ll indeed open a ticket. (Although the jpegs are perfectly normal ones, shot w my iPhone). And as for backups … I’m worried that I won’t even NOTICE that something is missing until it’s so late that my backups all only have the post-corruption copy!

It’s difficult for DEVONthink to decide if a JPEG is a duplicate or not – I don’t find that duplicate detection for images is 100% reliable. But I notice that your list of duplicates has a variety of icons, and some are “jpg” and some are “JPG”. Some of the icons indicate that DEVONthink thinks that these are documents (the dog-ear icon). If wonder if there’s an OS X-level confusion going on in the background? Have you tried a safe boot recently? Maybe there’s also a cache issue at play.