Looking for tutorial for Bonjour sync

I’m looking to sync DT and DTTG via Bonjour. I hunted all over the forum and found links to a tutorial, but every time I clicked I got a 404 page. There must be a tutorial somewhere; can anyone help me find it? I have never used Bonjour before and need real step by step instructions.

There’s a very clear explanation on page 54 of the downloadable PDF help file.

I have never used Bonjour before…

Perhaps not to sync your DT database, but if you’ve used Apple products you probably used Bonjour before

Bonjour is a network protocol to discover devices, primarily used by Apple. Developers can use Bonjour for all kind of services and devices.

Fun fact: Bonjour was originally called Rendezvous, but Apple changed it due to a trademark situation. They stuck with French apparently:
https://en.m.wikipedia.org/wiki/Bonjour_(software)

if you’ve used Apple products you probably used Bonjour before

True but it’s also used by non-Apple products as well.

Thanks for the tips! I forgot about the manual. I’ll check it out.

And I saw that bit in the Help documentation. I suppose I meant to say that I’ve never intentionally used Bonjour. As in, I’ve never had to know what it was or how it worked. Thanks for the background.

As in, I’ve never had to know what it was or how it worked.

And I think that’s exactly what Apple hopes to achieve!

I’m pretty sure Apple follows Dieter Rams’ rules in their physical design, and probably try to adhere to them in software engineering as well.
https://en.m.wikipedia.org/wiki/Dieter_Rams

Rule 4 states “Good design makes a product understandable (…) At best, it is self-explanatory.“

So does a user need to know what Bonjour is? Or can we do without?

So does a user need to know what Bonjour is? Or can we do without?

"Do you need to know how the sausage is made?’

Ok so I set up the Mac as host. Now I’m stuck on setting up the iPad. I can’t seem to save the password to enable syncing. Where did I go wrong? 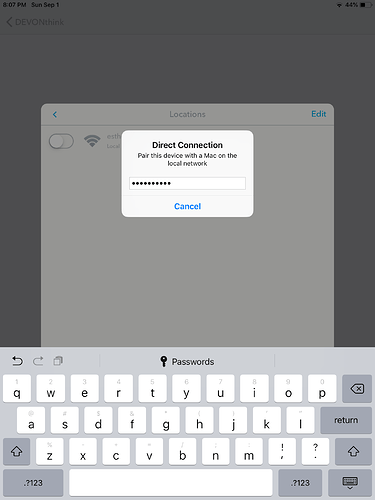 You need to enter the mandatory password you set in DEVONthink’s Preferences > Sync > Bonjour Options.

I did that, but it won’t let me save the password. I only have the option to cancel. So I can’t complete setup.

I entered the password I set on the Mac. But where do I go from there? The only option the program gives me is to cancel, which sends me back to square 1. See image above.

Is my copy of DTTG corrupted somehow? Should I uninstall and reinstall?

Here is what I did so far.

Settings -> Edit locations -> hit the green plus next to the local network. Then I hit “save” and got to that screen. On that screen I entered the password, but from there the only option was to cancel, which meant the connection wasn’t saved.

If you enter the correct password, the dialog will self-dismiss. The Cancel option is only to cancel the operation.

I entered the password I set on the Mac.

Ok now I get it. I’d entered the wrong password, but because there was no “wrong password” notification I didn’t realize that.

Now is there a way to download everything I have stored in dt onto the iPad?

Thanks for your patience! I know in the long run this will serve me better than Evernote but I’m finding initial setup far more intense.

You touch the sync location you just set up to see the list of importable databases. Enable the ones you want to import and they’ll download local copies to the iOS device.

Not Bonjour can be used to Sync between devices, IF:

I’m leaving my error, so you can poke fun at my typos in perpetuity