I admit this is a request borne out of my own carelessness and no one wants software designed entirely to stop people doing dumb things with it but…
I would like to suggest a slight teensy weensy change to either the relative location or distance between the two mail ingest buttons “Import” and “Archive”
This typing dumb-dumb guy just began archiving over 2000 emails into a group when I meant to grab just two pertinent messages. I can get back to where I need to be (I think) but it would be great if those two buttons weren’t so close together and similar looking.
Either that or have “Archive” prompt with an “Are You Sure?”
Some differentiation due to the drastic difference in result would be appreciated.

Some differentiation due to the drastic difference in result would be appreciated.

Thank you for the suggestion, we’ll consider this for future releases. In the end the difference depends highly on the selection, the result might also be more or less identical.

Did you notice the buttons have different words on them? And one has two words instead of one? 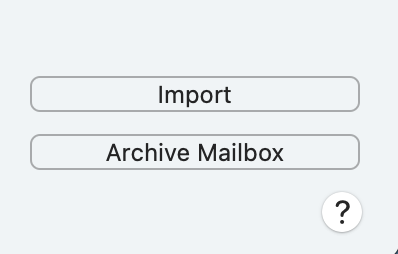