So there looks to be an error in the rendering of the Markdown code. Typically HTML statements are allowed in markdown and are interpreted correctly in the visual view. I have used this before in other markdown programs.

Since the markdown underneath does not support the GitHub checkboxes I tried to use a method to get around it:

which renders the checkbox just fine.

Unfortunately when actually creating a legal html code to complete it it is not rendered at all - . This could be an error with the markdown engine.

Please post the code you are using. We use MultiMarkdown 6, which has no checkbox support.

Lets try this not going to close the brackets so it renders.
<input type="checkbox"
The above would create a checkbox, and it does in the view
But the proper way to create a checked checkbox is
<input type=“checkbox” checked
and this does not render, and this is the way i got around a lot of times with Markdown programs that do not support the checkbox model. Unfortunately something is wrong with the renderer, as it should be able to accept HTML entires in markdown.

There is nothing wrong with the renderer. MultiMarkdown doesn’t support this syntax. 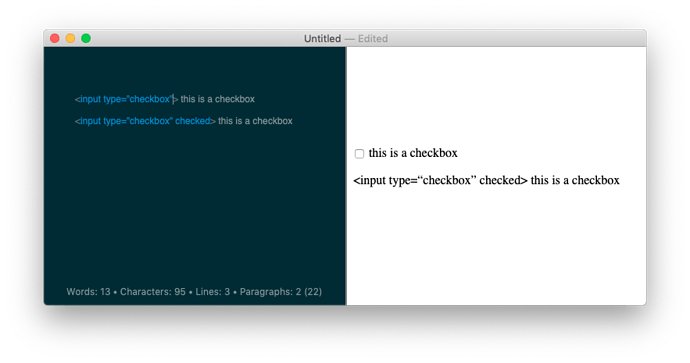