I encountered some annoyances in migrating from Evernote, and came up with my own workflow for dealing with them. While others have commented on some of these issues here before, I didn’t see a clear workflow that I could learn from, so hopefully this will help others doing the same thing.

This is far from the kind of import experience I would have hoped for when migrating thousands of documents (12,487 to be exact) to a new app, but once you have it set up it works pretty smoothly. It is best if you do it in small batches, one notebook at time. I had a number of false starts as I learned to set up rules, but now it seems to be working without errors. I hope this can help others trying to do the same thing.

UPDATE: Now that I know about @BLUEFROG’s excellent script, and read the step-by-step instructions for using it, I was able to streamline this process greatly.

There’s a script to drop the groups at Quick way to delete 'empty' imported Evernote notes - #9 by BLUEFROG
It also renames the pdf
Personally, I’m not concerned about the groups, I can work with them

My concern is tags are not assigned at the group level; the tags are duplicated among the child records
I used a script to transfer the tags to the group

I wish I’d been able to find that script when I was searching the forums earlier. Looks like it would have saved me a lot of time. And it would have been good to have the renaming feature, since what I was doing doesn’t do that. Thanks.

Install Evernote Legacy, the old version of Evernote, which does work with DT and also doesn’t limit how much you can export at a time.

This has nothing to do with DEVONthink. Evernote removed the cross-application channel when it rewrote the Mac app for version 10.
Also, the imports are controlled by Evernote’s AppleScript commands provided in the legacy version.

It doesn’t’ really matter whose fault it is. The are the things a new user trying to migrate from Evernote to DT needs to deal with and there is no good documentation about this that I could find. I’m trying to help users like myself - it is honestly very difficult and overwhelming and has caused me to already lose about two days of work. I wouldn’t be moving here if I wasn’t fed up with Evernote, so telling me that it is all Evernote’s fault doesn’t really help… 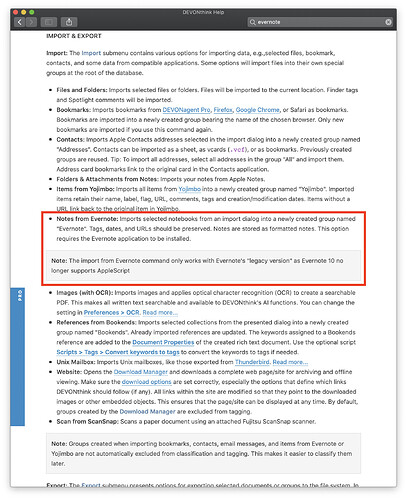 Now compare that documentation with what I’ve written above …

So everything is much easier with @BLUEFROG’s script. I’ve updated my original note to reflect this, as well as a link to the step-by-step instructions on how to use it.

UPDATE 2: In my experience, the DT import script is slower and less reliable than doing an export from Evernote and then importing using “files and folders” import from the enex file.

I can’t confirm slower/reliable; both methods use exported enex data
Manually exporting the enex file allows use of the Evernote’s Version 10 product
fyi Entire notebooks can be exported with no note limit
Separate exports per notebook are recommended to preserve notebook assignment

I was getting incomplete import of large notebooks (over 700 items) using the script, but not with file import.

It’s also worth noting that Evernote 10 recently added HTML export although I haven’t tried importing that output into DT. 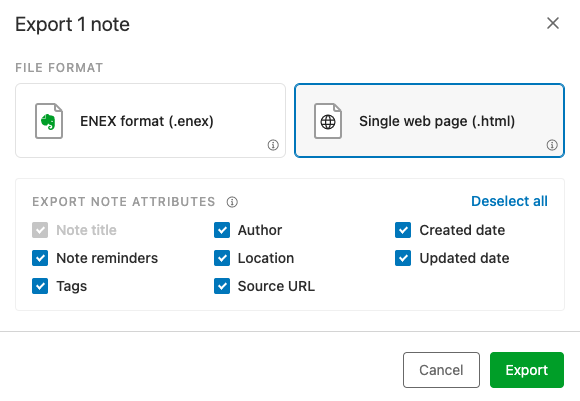 I still use Evernote’s web clipper with a free account and export to DT so I’ll try it next time I do a batch (and see if I can then get rid of Evernote’s legacy version).

Thanks. I’m happy to say that even though it took me almost a week, I’m finally done…