Neither Script nor Automater Workflow for OCR works

I have already posted about Folder Actions not working which looks to be more of a Lion problem; I’m now trying to work with the automater workflow to convert selection to OCR. I saved it as a application for drag and drop functionality; all I get is an error message that “Automator could not convert the input data to the desired type.”. I am dropping .pdf files, not a file of another type. Can anyone lend a hand?

I am not seeing any issue with images or PDFs dropped onto an OCR workflow. Did you follow the suggestion to include the “Set Current Group” action before the “OCR Items” action?

I dropped in the “OCR Items” action and when it suggested the prerequisite action, I allowed it. I then saved this with no further edits as OCR.app on my Desktop. Then I dropped a JPG of a map and a PDF i[/i] and both OCR’d with no problem at all. (I’m on 10.7.4 BTW.)

What is the recommendation on ‘set current group’ action - I am not familiar with this ?

I guess what I am asking is if the default, included automater workflow works? It doesn’t for me. I don’t have any idea how to build my own workflow. If there is one that works, I would welcome it.

You should give it a try. This one is super-easy and barely takes more than 2 minutes to build. Would you like to?

One little thing I would add is to click “Options” on the “Set Current Group” action and check the box that says “Show this action when the workflow runs”. What this does is brings up a dialog that allows you to choose an open database and group within. (The option to create a group on-the-fly may not be working as expected. I’ll have to check into this.)

Note also, that you could choose a Service at the beginning, instead of Application, and create a workflow that you could call when right-clicking on items in the Finder. 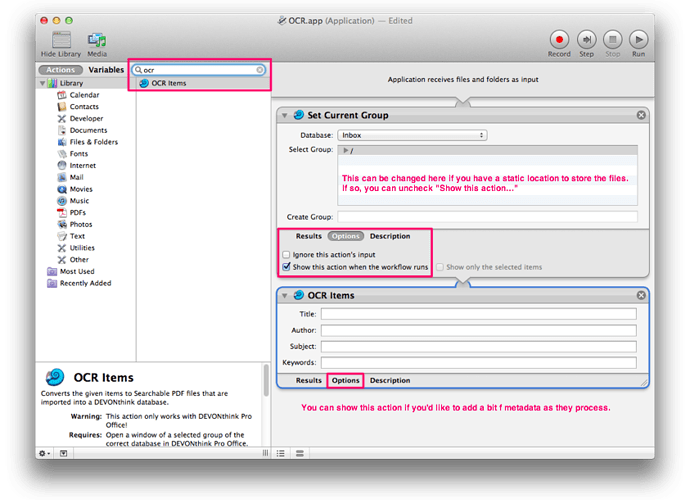 workaround: drag Automator window in the same space as Devonthink’s.