That is, what used to be colorized versions of the default folder – which shows up in System blue with the “Colorize icons” .preference, rather than the pale-yellow, faux-manila color that appears without that option – now appear as colored shadows without any borders or detail to the icon at all.

This makes the colorized folders look, at first glance, significantly different from any uncolored folders, which rather defeats the purpose of colorizing folders for simple and instant visual feedback.

The same lack of all other definition, besides the color shadow itself, shows up for all other icons as well. So that now, for example, I can no longer tell at a glance whether any colored Note happens to be Plain Text, an RTF, or even a PDF.

Was this intended behavior?

I’m not seeing that behavior over here on 2.3.3. If you quit DTPO, flush caches, and restart or log out/in, does the problem persist. Sounds like a cache problem.

I’m not seeing that behavior over here on 2.3.3. If you quit DTPO, flush caches, and restart or log out/in, does the problem persist. Sounds like a cache problem.

Thanks for the tip, but it doesn’t seem to have made a difference.

Could you grab part of the screen and post the screenshot?

OK. See what you make of this. Thanks. 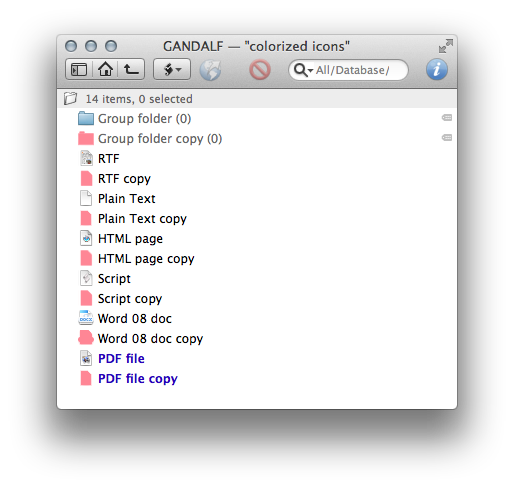 Apart from the color, those don’t even look like standard DTPO icon shapes. You might want to uninstall and reinstall the product.

A complete uninstall (trashing preferences etc.) and reinstall with a newly down-loaded version has made no difference. I also performed all system maintenance routines via IceClean for good measure.

I happen to work entirely without thumbnails (preferring the uniformity of default icons in all my view lists), but even if I add thumbnails and then colorize, the same loss of detail and inability to distinguish different kinds of document occurs.

It seems worth noting that this distracting anomaly occurred, and in its total form, only after installation of the recent 2.3.3 DT Pro update. I’ve no idea what could cause such a thing – but caches appear not to be it. There seem to be no other icon problems elsewhere in my system either.

Even if no one else is experiencing the problem in my form, what could have caused such a global and thoroughly consistent problem? – Christian, Bill, are you anywhere out there too?

I never used that option, so I cannot state if the display of the icons has changed. But reading this thread I activated the option for a test.

While I prefer the titles to be colorized …

… after activating colorized icons I get the same as you:

This is on a 2 weeks old installation of OS 10.7.3 with DtPO 2.3.3. If it wouldn’t be for korm stating he does not see the issue, I would have said that this is normal.

2.3.3 is broken - I can confirm that the icons are more intensely colorized than previously. IIRC, there was a gradient effect that toned down the colorization effect, and that is now missing. I had to reboot to replicate this, but now I can reliably repeat @Gildor’s and @berndm’s problem. I filed a bug report with DEVONtech.

Sorry I kept insisting this was a cache issue.

I guess the look of the folders is that way, but the file icons are fine. (No, I won’t reboot.

So, yes, korm, looks like DtP(O) is broken here.

…now I can reliably repeat @Gildor’s and @berndm’s problem. I filed a bug report with DEVONtech.

Sorry I kept insisting this was a cache issue.

No need to apologize for that; I was grateful for the input and it was surely a good first thought. Thanks very much for sending in the bug report. And thanks too to @berndm for confirmation; I’m glad to know I wasn’t bonkers.

Now all I have to do is wait – which usually isn’t too much of a problem with DT support and development.

The upcoming version 2.3.4 will fix this.