I am trying to create a database and unable on DevonThink, I made one on DTG, but it was in my inbox as a Group.

I made one on DTG, but it was in my inbox as a Group.

A group in the inbox isn’t a database.

Please provide more information about what is happening here. Thanks.

Thank you for your speedy reply. I am unable to make a database or encrypted database. When I click to make one it does-- nothing. To workaround it, I used the iOs app and made one.

I have been a user for a few days. My ultimate aim is to sort my project research items, organize my journal collections (with and w/o my markups). It could be misunderstand databases, am I correct to think that a database is a encapsulation of a body or work, so to allow me to keep them separate? It could be that I misunderstand Databases. But the issue of it not being created still persists. Thank you again!

This DB is called “A thing” please see below: 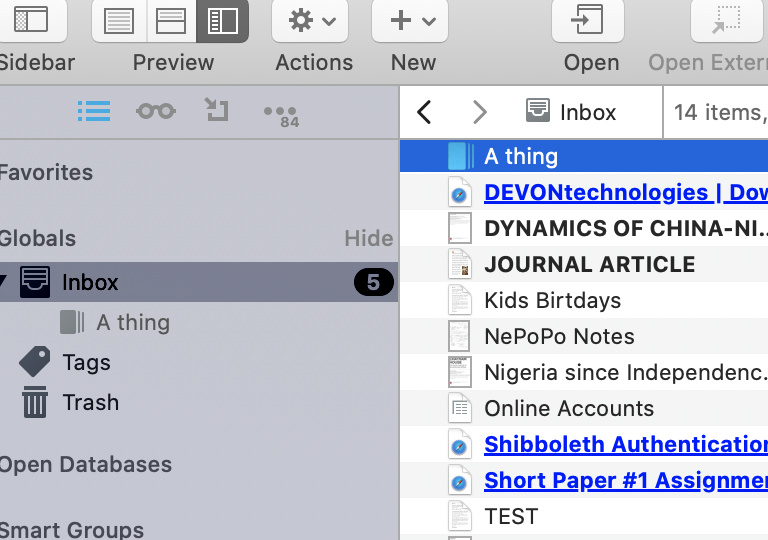 I’d suggest you read Help > Documentation > Getting Started to get your bearings about the philosophy and basics of DEVONthink, especially the DEVONthink Simplified section.

We had only a few reports of this occurring but have not been able to reproduce the issue. Let me look around a bit.

Are you using any of the apps listed here…

I didn’t get it resolved. I tried a lot of things to fix it. I booted in safe mode, I created a new user on the same Mac, I cleaned out some system stuff, and nothing fixed it. I was able to create a new database by installing DevonThink on my wife’s Mac. I’m wondering if some app I have installed is causing the issue. Below is my list of apps installed. Do you have any of the same apps? 1Password 7.app A Better Finder Rename 10.app A Better Finder Rename 11.app Adobe Acrobat DC Adobe Afte…

Also, select a file in the Inbox and choose File > Export > Document. Do you see the Save panel open?

Here is some irony. I used the IOS app to make two DB. (I think in my attempts to sort DT3 I did make a group named “A Thing”) 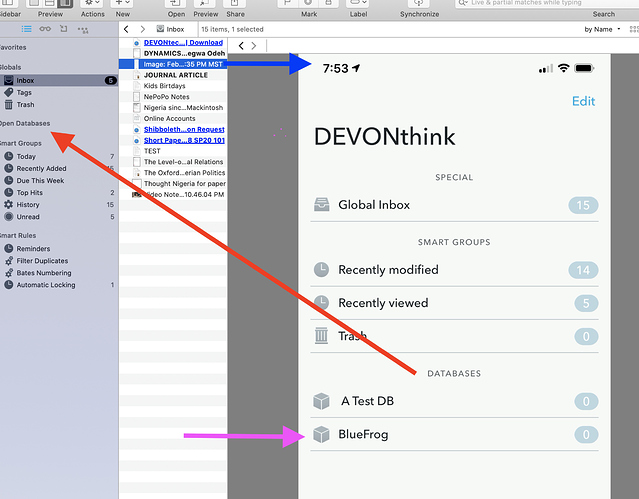 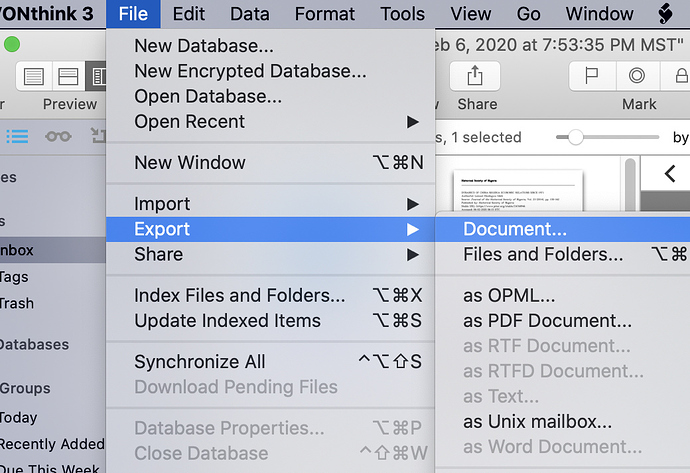 And after you selected the export option did you see the Save sheet drop down?

No Save Sheet option.

Does it work after booting the computer in safe mode and/or using a second, clean user account? This issue seems to be caused by third-party apps but we still don’t know by which one.

That’s what I expected and feared.

And yeah, try the options @cgrunenberg mentioned. Odds are you’ll be able to do it in safe boot; possibly on another account (but I’m guessing less likely).

Ok. A safe boot- this seamed to work.

I had Chrome as the the only login items, I removed it and now have no login items.

I am only able to create DT3 databased in Safe Boot. Unfortunately I have nothing else to remove.

I tried several times in and out of Safe Boot and It was constant. I can make a DB in Safe Boot, but not in normal boot.

Also, Databases do not sync to DTG (iOS)

Also, Databases do not sync to DTG (iOS)

This is a separate issue.

The persistent problem is the inability to make DB outside of the Safe Boot.

The syncing method I am using is the iCloud, I am doing that, as you may see in one of the above screen shot, I took a screen shot of my iPhone and upladed sent it to DTG, and it synced correctly.

Am I understanding ccorrectly that databased do not sync to via iCloud to DTG, vis a via.

Open Applications/Utilities/Terminal.ap and paste these commands as separate lines…

Am I understanding ccorrectly that databased do not sync to via iCloud to DTG, vis a via.

I am not sure what you’re referring to here.
Sync is bidirectional by design, so changes made on one device should sync to the other. However, they will not sync immediately, especially with iCloud. However, they should sync quickly enough in the normal course of things.

Just wanted to report that I have encountered this issue since updating to Catalina earlier this week. Unlike the OP, I was able to see the save dialog upon attempting to export a document and I also was able to create a new database upon entering safe reboot. Upon restarting my Mac, I now see that I am NOT able to create new database when not in safe mode. Thanks.

Which third-party software do you use? There seems to be a conflict.

Add a file to the Global Inbox, then select it and choose File > Export > Document.
Does the Save dialog appear?