Notes in Devonthink 3 are not retained

I’m noticing that when I annotate a file by adding info (Notes field) via the inspector, once I click away from the file there’s no certainty the added data will be retained. Where do I start to figure out what’s going on?

What Notes field?
A screen capture would be helpful.

FWIW, DT3 is in the midst of an hours-long indexing operation while I’ve been noticing this issue. 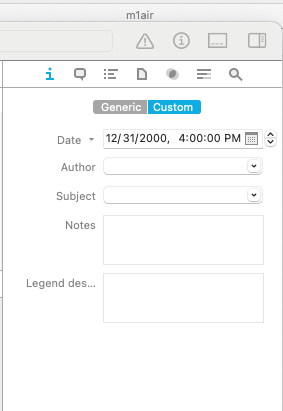 What are you indexing that would take hours?

I’ve been indexing a massive store of documents related to one project. At least one TB. Many PDFs. It’s been going since yesterday afternoon. I have an M1 Air w/ 8 GB RAM.

Although I guess I’m importing them? I was under the impression the distinction was less significant since the change to ver. 3, but I admit I have not made myself fully conversant with the documentation.

Edit: Also, many files have apparently failed the indexing process. They seem to open fine from the finder. Will they remain unimported? Perhaps this goes in a separate post…

Although I guess I’m importing them? I was under the impression the distinction was less significant since the change to ver. 3

You are mistaken. Importing and Indexing are two quite distinct entities.

Your Notes field is a custom metadata field if I am not mistaken? (Although I can’t remember whether it is predefined, and I’m AFK); I’ve not seen the behaviour you are describing to date, but then most of my custom metadata is populated by scripts. I’ll play with it during the day though, and see if I can reproduce what you are reporting.

As far as the error messages are concerned: are you actually indexing or importing (i.e. which action did you select)?

FWIW, DT3 is in the midst of an hours-long indexing operation while I’ve been noticing this issue.

Does this still happen afterwards?