As per the attached, a number of notes seem to be permanently stuck waiting to download. Is there a way to fix this up? 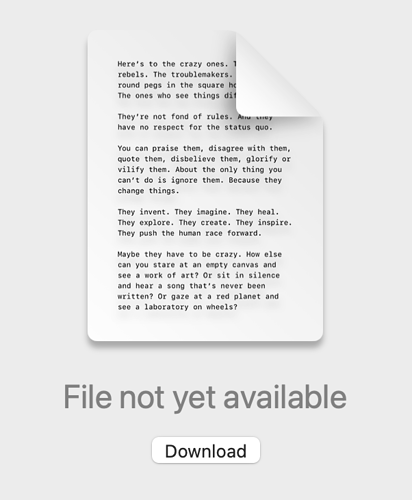 What kind of sync location do you use and on which device did you create these items? Are any issues reported in Window > Log?

I’m using iCloud CloudKit. Nothing shows up in Window > Log. I wonder if the problem arises because I was previously syncing using the legacy iCloud sync, although I’m surprised that they weren’t downloaded when I changed to the new sync? Plus, they were created on the MacBook Pro that I’m still using and so they are (in theory) in the local DB in the filesystem. Any suggestions on how to recover these?

Also: it’s all the notes in two Groups. One Group has 21 notes, the other Group has 3 notes. All those notes have this problem. No other notes in any other groups have the problem.

I wonder if the problem arises because I was previously syncing using the legacy iCloud sync, although I’m surprised that they weren’t downloaded when I changed to the new sync?

This should only matter if the new sync store was created on a device without local copies of these notes (usually an iPhone or iPad). But an alert should be shown if that was the case.

But DEVONthink would download the necessary data as long as the legacy sync store contained it actually and the legacy sync location was neither removed nor cleaned before all the data was down- and uploaded again.

Do the documents still exist on any device?

Do the documents still exist on any device?

Not that I can find - I only have two devices and both are missing these items.

Does the legacy iCloud sync store still exist or did you clean it before removing this sync location?

I don’t recall cleaning it. How could I check whether it’s still there?

Add the legacy iCloud sync location again to Preferences > Sync, then enable the database containing the notes and as soon as the initial sync will be complete, try to download the notes on your own.

But first please create a backup of your database(s), e.g. by duplicating them in the Finder or zipping them.

Thanks, just tried that. I couldn’t see any Remote databases in the iCloud (legacy) location, which I guess means maybe I did clean there?

A screenshot of Preferences > Sync while the old sync store is selected would be useful. 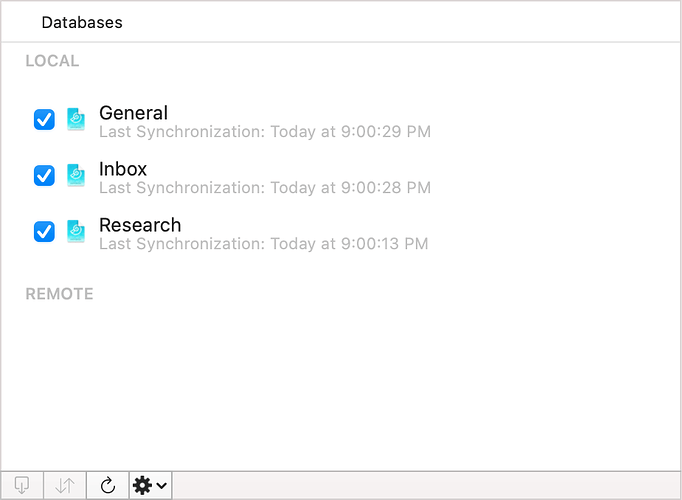 The REMOTE section contains only databases which do not yet exist on your machine. Did you try to download the notes via File > Download Pending Items?

No, but I will do that momentarily

That menu item is greyed out

Did you select the notes first?

Ah, that makes the menu available. But it doesn’t appear to do anything. Nothing shows up either in the Activity window or the Log

Then the legacy iCloud sync store was probably cleaned. Do you have any backups (e.g. Time Machine)?

Yes - I can dig back through those I guess and find a copy of the DB. Thankfully actually most of the notes in question are just the titles (some famous quotes) so it’s not a huge problem regardless.