it´s stored on a Synology NAS

And the sync store is a local sync store located on the mounted server volume or a WebDAV sync store?

Please IM me your email address so that I can look up if there was a problem with the helpdesk.

Cleaning the database (using Datenbank leeren from the contextual menu?) has solved the issue before (at least this one:

btw: this is what I did last time: Manifest files missing & incomplete database

not too long ago…

Usually Synology NAS is very reliable, e.g. I’m using 2 without issues for years. You might have to reenable the sync of the same database on iOS too.

So did I until recently/now…

What do you mean by “You might have to reenable the sync of the same database on iOS too.”

Do I need to enable more than shown under 6.?

so, what are your recommendations regarding the next steps that I should do?

Please select the same sync location on iOS and ensure that the database is enabled. If that’s the case, try to synchronize it.

and synching doesn’t really work, I guess - or do I need to perform any specific action on DT3 or DTTG?

What exactly does not work, e.g. are any issues logged on iOS or on the Mac? Or are the databases not identical to the ones on the Mac?

most apparently, the DTTG Eingang is not synched with the Eingang in DT3: 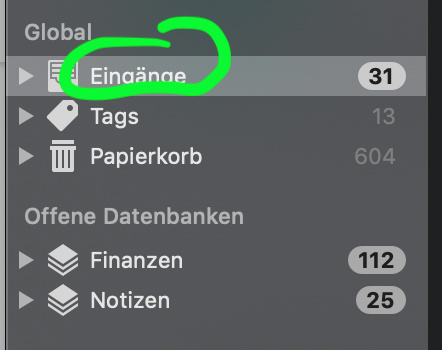 other than that, this is the most apparent issue:

The above procedure was only for the database “Finanzen”, it didn’t change anything related to the inbox. Please delete the log as this might be older entries as the entries include only the time. Are the same errors logged again?

yes, it was, but here’s just another one…

and yes, all errors logged occur with Finanzen, but not with Eingang…

Did you definitely clean the database “Finanzen” from the sync store as suggested? This should usually fix such issues. Is the folder in which DTSync.dtCloud is located on the Synology NAS synchronized or processed in any way by another software?

I did, but I did so again… now the logged errors seem to be gone.

No, the the folder is to accedes or processed by any other software.

However, Eingang is still not synched…

However, Eingang is still not synched…

And no issues logged on the Mac or iOS?