I’ve scanned some books into DT3. They are .pdfs to which I applied DT3’s OCR to Searchable PDF command, making them “PDF + Text” files.

If I highlight a section of the page, it copies fine, and pastes fine into another document.

Here are three images to illustrate. First, here’s what it looks like if I highlight a section of the page not including the first few characters.

Now, here’s what it looks like if try to copy just a small section from the first characters of the page. Notice it highlights the entire page.

And finally, here’s what it looks like if I paste into another document. Remember, I highlighted only three lines. But it gives me an image file of the entire page and then the pasted text of the three lines I copied. 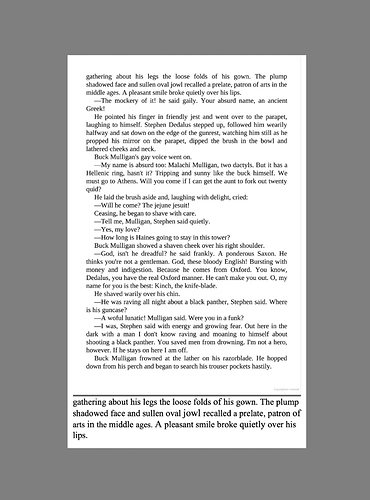 Is there anything I can do about this?

You scanned with what application?

It varies. Sometimes directly from ScanSnap into DT3. Sometimes - for online books - I take screen grabs and then use DT3 to merge and OCR them. But the problem occurs in either case.

This seems to be unfortunately an issue of the PDFkit framework of macOS once again. Does this happen e.g. in Preview.app too?

Yes, it’s happening in Preview as well, and also to scans I made outside of DT3. I just scanned a few pages in my ScanSnap and opened it on the desktop, opened it in Preview, and it happened there, so it appears not to be a D3 problem. Thanks for pointing me towards checking it out that way.