I keep a DT database of movie quotes.

I was noticing the other day in my database what I thought was a German grammatical mistake (I’m REALLY trying to re-learn German after many years.).

Yet, shouldn’t this really be: “Schieß das Fenster”?

Since this is the accusative case (Fenster being the direct object) the neuter noun (Das Fenster) does not change (only if it were “der” → “den”).

Like I said, this question is a bit (way?) off topic but I just wonder if this movie grammar “mistake” was due to someone not knowing German well enough (maybe me?) or maybe this is just “slang”. Since most of the German dialog in that movie is gibberish, maybe I’m expecting too much. LOL.

Like I said, this was a bit off topic, but thanks in advance to my German friends here.

The correct translation for shoot the glass would be schieß[e] auf das Glas or more literally erschieß[e] das Glas, the latter of which wouldn’t really be used in German, unless it’s directed at a person, as in shoot Bruce (erschieß[e] Bruce).

Since they translated glas as window (Fenster), the most common translation would be schieß[e] auf das Fenster.

Right. Thank you so much

That’s what my translate app said also (still using it to help me get up the German learning curve again…).

Still begs the question why Hollywood would make such an obvious mistake in a huge movie like that…No benefit that I can see. Hans Grüber was an educated person as depicted in the movie.

It’s very common for things like this to go unnoticed or unchallenged. People are generally watching a movie for entertainment only. And many people (myself included) are none the wiser.

As much as I hate Google, you should watch the "Such and so an occupation watchs movies about their field of expertise videos on YouTube.

Coming from a native speaker, that’s an eye-opening reply.

Actually, I’m US born and bred.

That video is very entertaining. Thanks!

You’re welcome and worries. Many people assume it due to my last name as well. I’m German and Irish by heritage but born and live in the US.

You’re welcome. They didn’t have DeepL then

I would recommend this app for translations in case you are using Google.

Also, sometimes there are exceptions to the doesn’t matter, good enough rule @BLUEFROG mentioned. One I remember is the show Counterpart. I haven’t watched all of it, but some scenes in which J.K. Simmons speaks German are flawless. It’s practically accent-free, something I’ve never heard before by an American actor. Not that I mind actually – most people have some sort of accent after all – it was just very impressive.

That’s interesting, I see so many German sounding names when looking up actors on IMDb and also learned that German is the largest ancestry group in the US. I never knew… 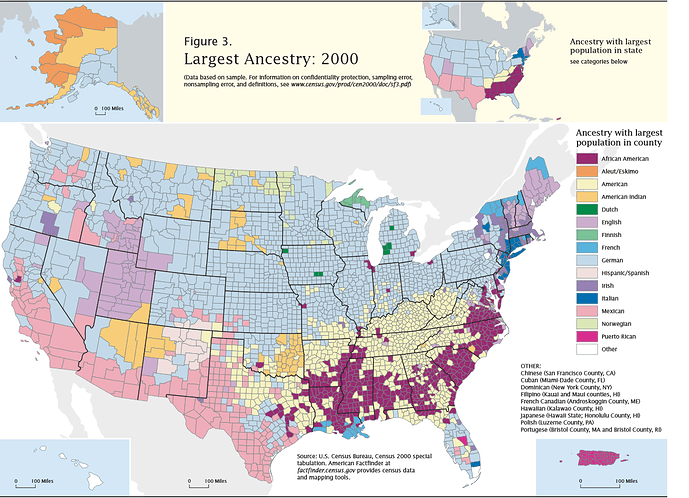 That’s an interesting map for sure.

And indeed, there are some movie-makers who strive for more perfection. In a movie like Die Hard (which is still an awesome flick!

), I think the explosions and gunfire minimize the effect of a lack of perfect German

a lack of perfect German

Yeah, I don’t mind that at all, just notice it when it’s really well done, like in the show I mentioned. I watch everything undubbed and prefer English as a language anyway. Funnily enough, American dialects that are apparently disliked in America, I find to be the most beautiful. The southern varieties in the show Justified or the West Virginian (emulated by the protagonist) in Clarice are amazing.

Well, this thread makes me feel a little more comfortable about the slightly off-topic one about 1Password 8!

I wanted to reply about 1Password8 without reading your topic on it first. I use 1Password (7) and have thought it was the best program out there for so long. But, now, with the 1Password8 - “you MUST pay to put your most personal data on our servers or forget it” model - I’m done with this program! Since I’m a mac user, I’ve migrated to KeepassXC. I refuse to be bullied into where I must store my data and have only a subscription option to boot.

Keeping Devonthink in the conversation a bit here, I’m impressed there are always perpetual purchase options as well as subscriptions. I don’t mind paying for good software so DT has always been a painless purchase.

Finally I wanted to ask folks if these (expensive) sites like Lingoda are worth it for learning German? Very expensive. Right now, I’m slogging through my old German text book from College (the book is so old it has “schreibmachine” and "Fraülein). But, it’s a complete two semester course I took a long while back so I know I, well, knew it once. Not sure this is the path to fluency but at least I’m not spending $200/month for some online option.
It’s been too long since I lived or visited Germany for that to be any help. I am trying to find some local people who speak German but that’s proving to be difficult. Spanish? Sure, no problem, but German is a different story.

Thanks for any comments or suggestions!

I’m using the translate app by Apple. It seems to do a decent job, but I don’t think I could get idiomatic expressions (barely know any yet!) like “Ich verstehe nur Bahnhof.”.

I’m with you on Google!

That’s probably not the correct idomatic way of saying it…

Regardless, I liked Babble for learning Turkish and some Russian. I don’t know if they offer German courses, but at least their offices are in Berlin.

Oops, thanks for that. I should have looked it up first before just typing it in but I was feeling confident after all the great replies from native speakers and just went for it!

The last time I heard Fräulein was in “Raiders of the Lost Arc” with the stereotypical German bad guy from that era. From what I’ve read, nobody uses Fräulein any more than we use “Miss” in the US.

I’ve heard that Babble’s approach (flash cards, etc.) really isn’t the best way to learn German. Not sure slogging through my old college text book is that great either but I’m spending 30 minutes a day watching “Tageshau” (spelling?) - German news on TV. I can get the basic gist, but it’s still too fast for me to really understand much. A bit frustrating, but you work with what you have…

I really appreciate your reply. Thanks!