I’ve recently moved my database file. It used to open automatically when I launched DTPO, but now I need to manually open it every time.

To set it to auto-open, the help tells me to click the database, go to Database Properties, and then click the ‘Use as Default Database’ checkbox.

All good… except that my database doesn’t list that option! I see the checkbox in the screenshot in the help, but mine doesn’t match. (I have only ‘Create Spotlight Index’, ‘Exclude Groups’, and ‘Share Database’.)

Has this changed since the help was written? Or do I somehow have a defunct database set as the default, which is blocking me from defaulting to this one?

What version of DEVONthink are you using?

In the current release (2.8.3) if you open a database, and do not close it before you quit DEVONthink, that database will reopen the next time DEVONthink is run. Of course, if you moved your database and DEVONthink doesn’t know where to find it this will fail. You would need to browse to the new location, open the database and proceed.

I’m using 2.8.3. The database is definitely not getting re-opened. I’m exiting by quitting (no close beforehand)…

I’m using 2.8.3. The database is definitely not getting re-opened. I’m exiting by quitting (no close beforehand)…

Is there anything listed in the global sidebar under Recent Databases? It may be the case that DEVONthink is confused about where the database is since it was moved. Try closing all open databases, leaving just the Global Inbox. Select File > Open Recent > Clear Menu. Quit. Restart. File > Open Datatbase

help tells me to click the database, go to Database Properties, and then click the ‘Use as Default Database’ checkbox

I don’t see this instruction in the 2.8.3 manual of DEVONthink Pro Office.

Thanks for the suggestion Korm. I cleared the recent databases, quit, and re-launched. Opened, quit, and launched again, and no database opened. I repeated it and still nothing opening at launch.

You’re right that the instruction is no longer there in 2.8.3 – I must’ve been looking at an old forum posting). The screenshot still shows that button, though, for what it’s worth. 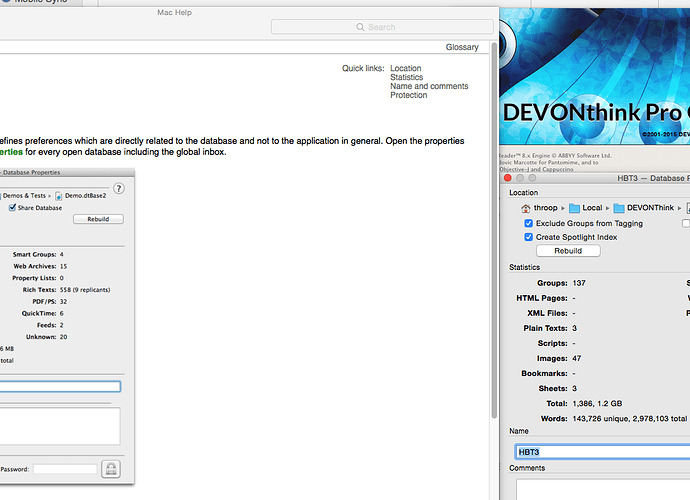 So, try quitting DEVONthink. Move the preferences file to your Desktop (~/Library/Preferences/com.devon-technologies.thinkpro2.plist). Open DEVONthink, your database, etc., and see if your database now persistently reopens at launch. This test will show if there’s something wrong in the stored preferences. You’ll lose some settings by testing this way, which can be reversed by putting that preference file back where it came from.

Another possibility - did you have some portion of that database set up as a Sorter destination? I would remove it from Sorter and see if that helps.

You are definitely not seeing standard behavior. If these tips do not work you’ll want to consider opening a ticket with Support

Do you have a database set to Sync before closing?

Korm – thanks for the suggestion about the preferences. I tried that; no luck.

Jim – yes, it is set to sync. The database does successfully sync before quitting.

This should be fixed in the next maintenance release.