First-time post here. Hello, and thanks for all the insights along the way. I have been using DT for a couple of years now, but I have a recurring problem that urged me to discuss it here.

I have not saved the password in the keychain or anywhere. DT stops asking for the password after a while, and databases open fine without pw.

This has also happened with the old way a few times. I’m using the new iCloud sync, which is also clunky, like the inbox not being synced and a general very slow sync. That the database opens without a password always happens on the computer that the database get synced to, never on the one where I created it.

Does anybody else experience such a behavior? How is this possible?
For me, the sync was always the Achilles heel of DT, and I’m now considering using something else I want this to work reliably but would so much prefer to stay with DT. So any help would be greatly appreciated.

Thank you very much for reading, and have a great weekend!

The first-month password protection works, and then all of a sudden, I can open the database without a password prompt.

How did you close the database the last time? Does it work again after rebooting?

Sometimes I just quit DT and don’t close the Database manually. It is all a quite erratic behaviour. I can close the database and open it without password. Also shows without the little key icon next to it. Sometimes does, sometimes doesn’t …

Is there a possibility to reset all sync data so I can start fresh? It seems that so many old databases randomly show up under the sync settings.

Also shows without the little key icon next to it

What’s the path/extension of the encrypted database according to File > Database Properties and how exactly did you open it?

I added it over the iCloud sync feature. Here is the data for Database Properties: 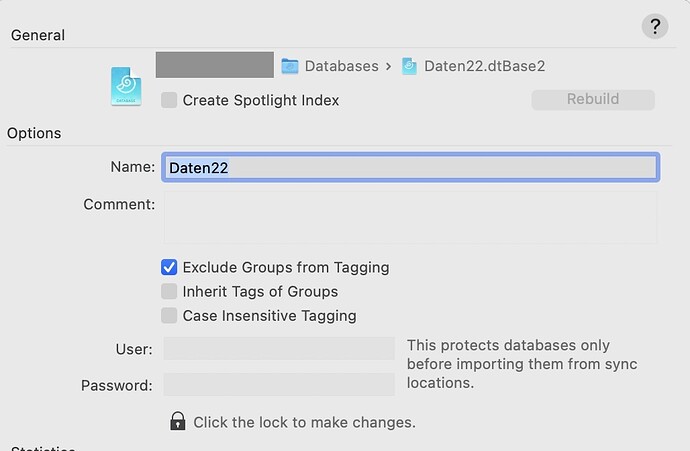 Is there a possibility that the sync is somehow disabling the password protection of the encrypted database?

On the other machine where it was created and passwort still work it looks like this: 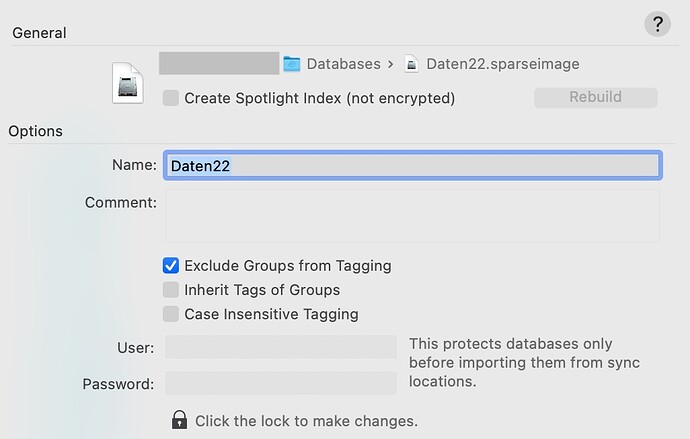 I added it over the iCloud sync feature. Here is the data for Database Properties:

That’s just an ordinary database, not an encrypted one. Whether a database is locally encrypted or not is up to the user, that’s not synchronized.

Use the contextual or action menu in Preferences > Sync to import remote databases as desired.

So this means if I sync an encrypted database it looses the encryption? This doesn’t make sense to me. Please see last image, it is encrypted on the machine where it was created …

How can I make sure to keep the encryption with the sync?

So this means if I sync an encrypted database it looses the encryption?

This is just a local & optional encryption, the sync uses its own encryption.

But how do I keep the password for the database while syncing it to another computer?

IMO the password should also sync to the new sync location. Imagine 1password just opening up at the other device. If this is not the case how do I protect the synced database again?

If this is not the case how do I protect the synced database again?

Delete the local copy of the database (in DEVONthink, not via the Finder) on the computer that doesn’t use the protection, afterwards import the database as an encrypted one via the contextual/action menu again from the sync location (see Preferences > Sync)

Thank you for clarifying. IMO this should be the default

Thanks so much for the speedy responses!