PDFs not syncing/file not yet available on multiple devices?

I’m fairly new to Devonthink, and I’m having an issue with PDF files syncing from one device to another.

I took some photos of a notepad I need to archive (using the - boo hiss - Evernote Scannable app on iOS). That app saves photos as single PDFs. I dropped sent those to DevonThink To Go, but despite leaving the app open and connected to Wifi for while, I don’t see them on my other devices (iPad or Laptop).

On the iPad they show as there, but requiring download (which doesn’t do anything - not even an error), and on the laptop I see the error: “File Not Yet Available” and a download button, which also does nothing.

Any ideas? I’m using Dropbox to sync between all devices and it seems to be fine for plain text… but not for these PDF files. Thanks so much. 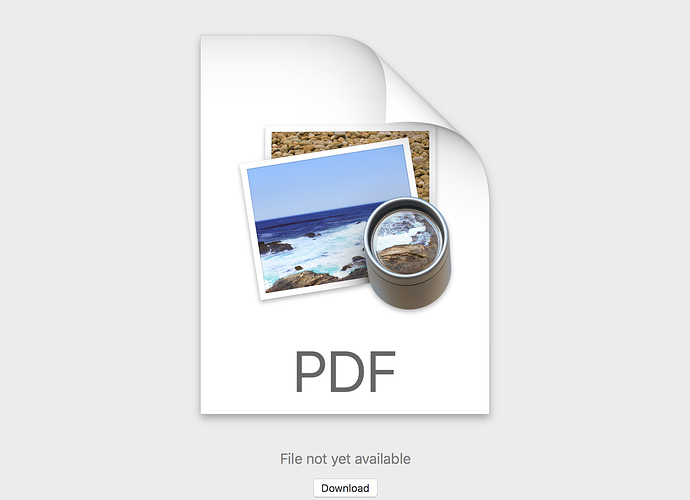 Yep - I’m having the exact same problem: PDF document dragged from within an email into DTTG on my iPad (v 2.6.5), which renders perfectly. However, in DTPO (2.10.2) all I get is the Adobe logo and an invitation to Download, which does nothing. Same deal with DTTG on my iPhone too.

I’ve rebuilt the database in DTPO and still no PDF. Interesting that the size is accurate though, which indicates that the metadata appears sort-of intact.

But where’s the file?

Both select Help > Contact Us to start support tickets. Thanks.