Problem with OCR in DT3

Is the beta version equipped with all features for DT3Pro? I have a problem with OCR, if I use OCR to process a pdf document, DT 3 crashes. Abby fine reader was installed.
Furthermore I can not more use my older ScanSnap equipment, which works fine with DTPO 2.
Is this a question of the hard- and software requirements?

Crashes should be reported to our support ticket system. Hold the Option key and choose Help > Report bug to start a support ticket.

We don’t specifically support certain scanners. If the scanner can be used on the operating system you’re running and the Image Capture application or Preview, it should work with DEVONthink. With a ScanSnap, the compatibility of the hardware and software from Fujitsu determine this.

I can use an iX100 with DEVONthink 3 and ScanSnap Home with no issues.

Note: The next beta corrects an OCR issue with ScanSnap Home, but the issue wasn’t leading to any crashing.

Does not work at all in my case on DT3. I purchased a standalone copy of Finereader to see if that would help. Please let me know what I’m doing incorrectly. 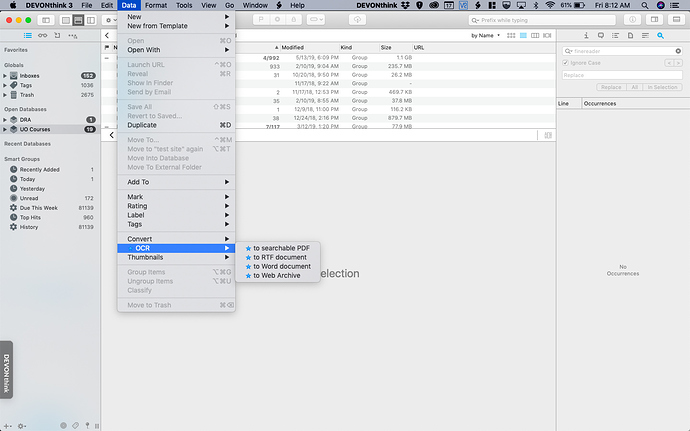 The last window shows the message I receive when I try and convert to searchable PDF.

If you are running an unlicensed trial, there is a daily limit on OCR operations.

I bought the (student) license, and in checking my account it says it doesn’t expire until 2020…

That said, it hasn’t performed a single conversion.

The screencap doesn’t show a selection, or it appears you just have the database selected.

Hello again,
Now after upgrading to beta2, I have tried to use the ScanSnap S1500M, the old one with ScanSnap Manager for scanning documents to DT3. The documents were transported to the inbox, which was easy to find. But to my surprise they are listed as Adobe Dokument, but OCR is not possible. Also a conversion to pdf is impossible. Is this behaviour depending on the OS or on the outdated ScanSnap software?

What’s the file extension of the document actually? Only images and PDF documents support OCR (or conversion to PDF).

the extension is pdf. It is strange to me since I could open the file with Acrobat 9 and doing OCR, but there is no influence on the behaviour in DT3, there is no interaction with the document possible. No access to the text and no zoom possible.

Does reimporting the file make a difference? Are you able to view the file in Preview.app?

I can open it in preview.app and there is zoom as well as text selection possible, but back in dt3 there is only static without interaction. The document is shown as Adobe pdf document, without text. but in preview.app it contains text.

Did you try to export and reimport the document?

sorry for the late reply, since I was out of office.
The export and reimport was successful. now the adobe document behave as expected, But this is an odd workflow in my opinion. Scan directly to the DT3 database, making OCR with Adobe Acrobat Pro, export the file and reimport, because OCR in DT3 is not running
.

That’s not the suggested workflow of course, it’s just for debugging. Did you scan directly to DEVONthink or e.g. to DEVONthink’s inbox folder?

The document was scanned directly from ScanSnap Manager to the inbox folder of DT3. The file was indicated as Adobe document. It could be opened with Acrobat Pro 9 for doing OCR, since the OCR with DT3 was not operating.
Now I have made an additional scan with OCR in ScanSnap Manager directly into the inbox folder, then exported the document, deleted it in the database and imported it again without further processing. The result is a pdf file as desired.

Scanning to the inbox folder isn’t recommended actually, this folder is only intended for saving documents to DEVONthink (or other fast operations like moving files). But slow operations like scanning or downloading can cause issues as DEVONthink doesn’t know when the operation will be complete and therefore might import an incomplete & corrupted document.

And that’s what probably happened in your case. Therefore choosing a different folder and sending the scan directly to DEVONthink should fix this.

The scanner output must not be stored in the Global inbox, but in DT3 directly. With the old SnapScan Manager and ScanSnap S1500M I cannot activate the DT3 as output target. Does this mean that I can no longer use the direct scan with my old appreciated equipment?

This contribution is obsolete now

Now the interaction between SSM and DT3 is going well, except the OCR. It starts either when it ist started automatically in the presetting or starting from the Menue “Data”, then DT3 crashes
I have already send an crash report.