I keep having problems with the interface since using DT3. When I open the app, a horizontal chunk of the general interface, just beneath the toolbar, is missing from the view. When I drag it down, I can see just a little bit of the missing view (hidden folders etc.) 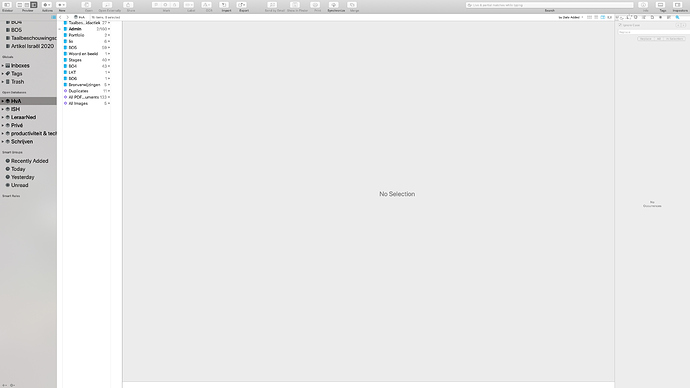 Schermafbeelding 2020-03-20 om 08.49.252560×1440 183 KB
The problem persists while removing or adding the toolbar. When opening a new window from within DT though, no such problems occur. Do you have any idea of the cause of this behavior?
By the way: I have the same problem on my retina laptop as on my non-retina monitor (non-mirroring).
I added a screenshot for explanation.
cgrunenberg March 20, 2020, 10:27am #2

Which version of macOS and DEVONthink 3 do you use?

Does deleting the preference fix this? Just enter this in the Terminal.app while DEVONthink isn’t running:

I think this has worked: the problem disappeared (at least I can’t replicate it right now)
Thanks a lot!

I’m afraid it didn’t help. The same problem occurred when I just opened the app.
Do have any other suggestions?
Are there more users experiencing this problem with the interface?

We have received only few reports of this kind during the last 11 months but none lately. And so far we couldn’t reproduce this. Does this happen after certain actions or changing settings?

Not that I am aware of. I’ll try to keep an eye on what happens when I do what the coming days and report back if when I notice a particular sequence.