Question about Replicants and Tags in Devonthink 2.0 beta

In the upgrade guide it says
“DEVONthink’s tagging approach is based on groups and replicants as technically tags and groups are interchangeable. So, tags are just a different visual representation of groups in DEVONthink. Adding a tag to an item in DEVONthink creates a replicant for it it the corresponding group, removing the tag removes the replicant from the group.”

I know that tagging is not fully implemented in the public beta. At the moment tags seem to be assigned by Devonthink based on the groups and sub-groups you put an item into. Like it is described in the upgrade guide - just the other way round. I have just created my first replicant and expected that the group I replicated it to would also appear as a tag in the information panel. But the tags correspond to only one location of the item. The group I replicated it to does not appear in the tags list. I don’t know whether this is a bug or just a consequence of the still missing tagging implementation. That’s why I post it in the forum.

I can’t reproduce your problem (if I’ve correctly understood it), though it sounds similar to the limitation of only one “random” instance of a replicant item appearing in this simple Smart Group:

And searches only return only one instance, which I posted an objection to years ago. It’s not always apparent from search results that an item has replicants, e.g.: 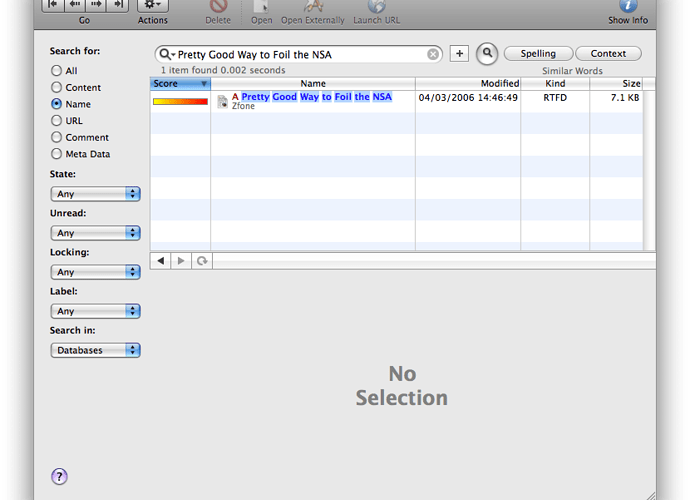 Search Results.png830×717 84.4 KB
The red A is the only visual clue. Plus selection highlighting completely hides the red indication in an item list:

Picture 2.png744×53 8.32 KB
The ability to easily list and find locations of all instances of replicants has been suggested several times, e.g. displayed in the Information panel. Using Go > Next/Previous Instance is clumsy; I’ve never liked navigation between different groups being the method of revealing hierarchical locations of replicants within a database.

There’s plenty of room for improvement in replicant management, even without considering more grandiose ideas like implied replication and virtual groups.

I’m mostly in “wait and see” mode with tags because they’re not fully implemented and Dtech seems to have made up its mind what they’ll be in 2.0. It’s hard to make further suggestions and provide constructive feedback without having something more tangible to work with.

Thanks for your reply! Yes, perhaps our problems are related. What I meant is the following: I have an item in my database which I put into a group called “science and religion”. I replicated it to another group at the same level in the hierarchy called “astronomy”. What I expected was that a) both instances of the item would have the tags “science and religion” plus “astronomy” or b) that one instance would have the tag “science and religion” and the other the tag “astronomy”. But both instances only show the tag “science and religion”. Perhaps that’s because of the limitations of tagging in the public beta. It certainly is not the behaviour I expected after reading the upgrade guide. Although the quoted passage is written in light grey, meaning that it is not implemented yet. And yes: It would be great to see the promised tagging features in action and to know what will work and what won’t.

After replicating it to the Books group:

Books now shows up in the Tags field and the replicant Instances count increased from 1 to 2. Nothing suspicious there, but …

The Location is misleading; it’s always Zfone regardless of which instance is currently selected. I’ll eventually submit a bug report about that. There’s always some sort of goofiness whenever I’ve dealt with replicants.

Btw, it probably makes sense for only one instance of a replicant to show up in searches but I still think there needs to be clearer indication (in all contexts) that an item is a replicant.

Thank you so much for your reply!!!

Well, it was all my fault

- or the fault of the person who designed the size of the tags field.

I just couldn’t see the additional tags in there since the field is so small (and German has really long words!). There is no scrollbar or anything indicating that there are more tags than the ones I can see. I can’t figure out any way to scroll through all the tags entered in this field. (Which, again, may be just my fault! I can only see two lines of tags, whatever I try.) But I can see the edge of the “frame” (or whatever you call it) of one tag at the very end of the field. So there is one more! In case any Devontech-Person is reading this: Please make the tag field expandable or give it a scrollbar. But I’m glad that everything is working as expected. So thank you for your time and especially the screenshots which helped a lot. And as you said: the location is also misleading.

Well, you made my day!
Birgitt

Glad I could help and make your day.

Thanks for explaining the problem. Someone from Dtech will probably read this thread even if they don’t respond. There’ve been other reports of certain fields being too small, e.g. in the Smart Group editor.

I like using screenshots than can augment forum topics. And one reason I recently registered Screenflick is to occasionally make short screen recording videos demonstrating problems that are hard/lengthy to describe or to capture with simple screenshots. I’m considering doing one showing some of my ongoing struggles with DTP focus/navigation.

While basic tagging functionality is, internally, already implemented, DEVONthink 2.0 public beta does yet come with a tagging interface.

Actually, that should read:

… does not yet come with a tagging interface

My recommendation is to ignore tags until they’ve been more fully implemented and announced.

Thanks sjk. Will do.

Hi. I just started testing out the DevonthinkPro 2.0 beta.

I have been deciding whether to buy it or use a simpler program called Together. The reason I am considering Together is that it lets you add tags manually to any file.

So, I’m wondering: will a more robust tag feature be included in the final version of DevonthinkPro 2.0? Or will such a feature be added as a later release? I am just trying to figure out if I should wait or not.

Check the blog about the new beta version just released. It talks a bit about when the tagging feature will be fully implemented.