Question about replicating into an indexed Obsidian folder

The second issue is inevitable but is there a workaround for the first issue?
I think I might have to play around with a smart rule or something perhaps - create a replicate and move smart rule or similar.

replicants in the Finder?

Replicants do not generate copies of a file, so if you replicate into an indexed group, no file is put into the file system.

Did you read the In & Out > Importing & Indexing > Indexing and the file system section in the Help and manual? 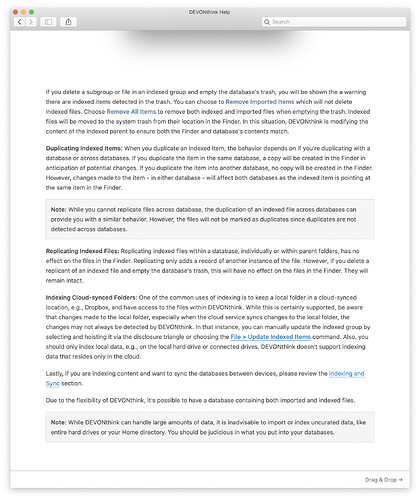 Thank you Jim for the response.
Forgive me if I am missing something about replicant behaviour, but I’m not sure that is the issue I was talking about.

I actually think it’s a bug and shouldn’t create a file in the Finder in either instance.

well I hope this is a bug you are able to turn into a feature or something as it certainly helps my work. Although I doubt this will be possible due to the nature of replicants and the finder.