I have a few reminders I added yesterday, set to trigger monthly on the 15th (see attached image). They triggered the first time as expected and ran a script I wrote to move them (see below). That all works fine.

However, the update panel for the reminder changes to an hour later and the script fires again, and so on. Isn’t this supposed to change to the next month’s invocation not an hour later? 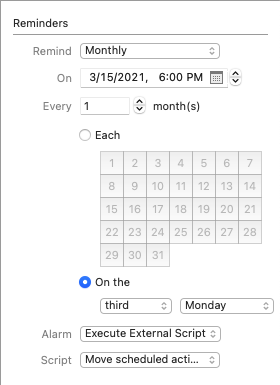 It appears to happen only for the monthly case, as far as I can tell. I have a complex, weekly repeating reminder that works as expected. The same script gets triggered and the Due date gets set to the next repetition as expected.

In attached screen shot is there way the reminder looks now after triggering early this morning. The configured hour is unchanged, just the day has changed. I also had this one run over the weekend and it currently skips over Sunday. 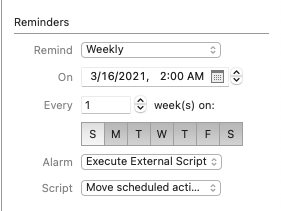 The reminder in my original message in this thread just triggered again and updated it’s reminder by an hour. See attached screen shot.

NB: The other couple of reminders exhibiting the same issue have also triggered. 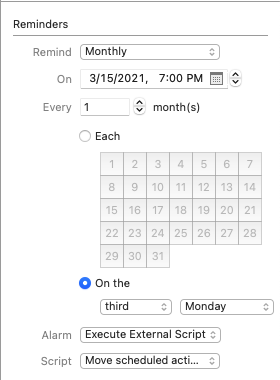 Which version of DEVONthink do you use? In addition, does this also happen if you use a different action instead of the script?

I just duplicated a repeating reminder with this problem and changed the action to “Display Alert” and got the same behavior. Alert tiggered on time and Due Date reset to one hour from now.

I noticed that the repeating reminders from yesterday stopped repeating overnight. It looks like they successfully set themselves to the next month’s repeat date when they triggered just before midnight. See the attached screen shot from the same reminder that was repeating yesterday.

This makes me think that a work around for now might be to set the reminder time to a little after 11pm. For my purposes, that would be fine for the moment. 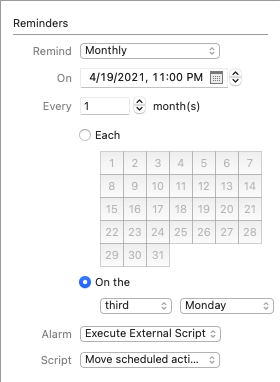 I just duplicated a repeating reminder with this problem and changed the action to “Display Alert” and got the same behavior. Alert tiggered on time and Due Date reset to one hour from now.

I tried to reproduce this but without success so far (using Thursday instead of Monday but this shouldn’t matter). Which system language do you use, what’s the first day of the week?

Thank you! Today is Monday but we still can’t reproduce this. The only difference is that we used the 4th Monday of the month.