I have replicated files in two different groups within the same database, then I set a smart rule to move replicants in one group to trash. However, running this smart rule will move all replicants (including the copy I wanted to keep) to trash. Simple drag-and-drop works fine, that is, if I drag a replicant to trash, the other copy remains. Am I setting smart rule the wrong way or is this a bug? Thanks.

Please post a screen capture of the smart rule. Thanks.

Attached. Basically, I replicate papers to the group `iPad Reading’ which is synced to my iPad. Then after reading the papers, I remove the tag and run this smart rule to remove the replicant. But this rule actually moves the original file to trash as well. Is there anything I am setting up the wrong way? Thanks! 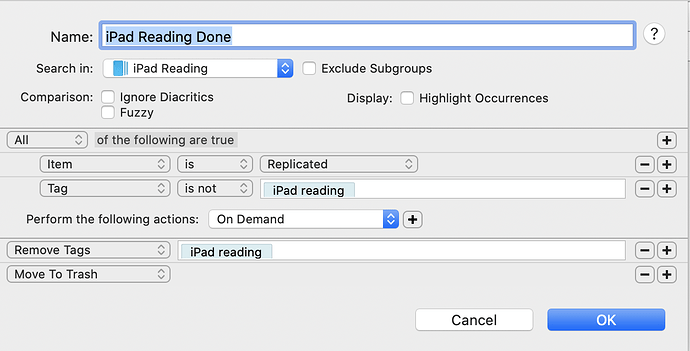 Shouldn’t you be selecting for “tag is iPad reading? You’re removing a tag that wasn’t there to start with…

Yeah, that ‘Remove tags’ step is redundant as it does nothing. I removed it as attached, but the smart rule still moves both the replicant and the original file to trash. 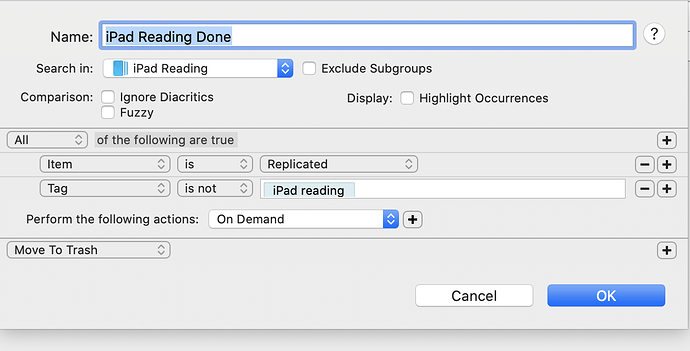 I have confirmed the behavior and yes, I’d say it’s a bug since the other instance wouldn’t be found in the same parent group.

Development will have to assess this. Thanks for your patience and understanding.

The next release will finally improve this.

Is this new release already published? Because it looks like the behaviour is still the same. I am looking for a replica in an external folder, move it into the database and then want to move the replica to the trash. However, also all replicants are moved to the trash.

So what I am trying to do here is first add a tag Onedrive_Replicant, which runs the script below: 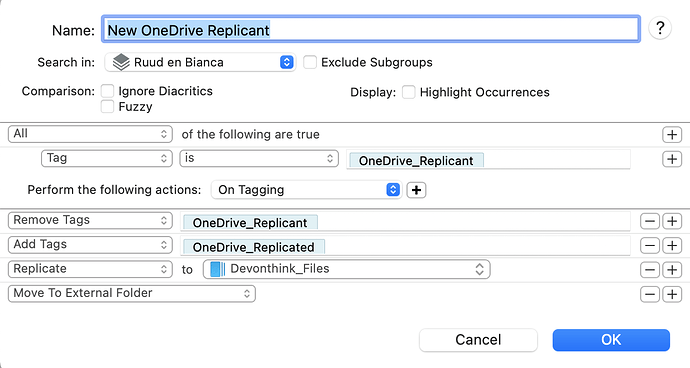 Then when the file has been edited on another computer, the flag has been removed and should be put back into devonthink. Not running this automatically yet as the flag is removed (in windows) as soon as the file is saved the first time. (I am trying to set this up so that I can edit these files on another computer but manage them on my mac in Devonthink).

No, this hasn’t been released yet.

However, I can confirm deleting a replicant does not delete all its instances. 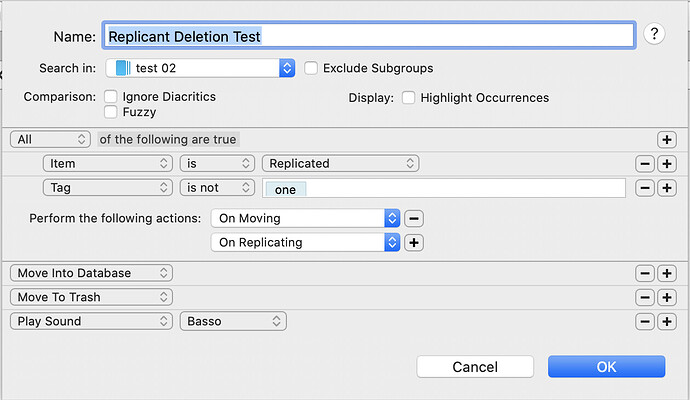 Thank you. I have changed the to include item is replicated. However that still moves both items to the trash it seems.

I will split up the rule into two parts. One to move it into the database and one to just check for replicated items in this folder and move them to the trash to see if that works.

You’re welcome. However, I am running an internal beta that addresses the issue.

Sorry for such a late reaction. But the update of Devonthink fixed the problem indeed. Thanks!

No worries and glad to hear it!