I have chosen to automatically file items in DEVONThink using the below AppleScript inside a smart rule if / when an items is tagged. I am unable to get the last step (—Remove Tags) of the script to execute. Is it because the item has been moved? I am not a programmer so please speak slowly and I may understand it :). If there is a better way to do / write this I am all ears… 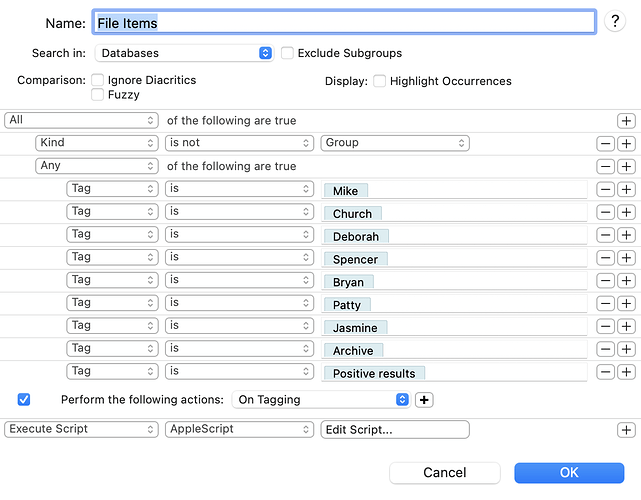 Before getting to your question, I’d like to remark on a very general problem with this code (which is not meant personally, it is just something that one can see fairly often). Whenever I see repetitions like “<tag>/identical group in identical database”, I cringe. This pattern calls for a data structure (very loudly). Even in AppleScript, a record might do the trick like so

Then, in your main code, just loop over all the keys in theTargets. Adding a new tag/target combination is a lot easier that way (as is removing), and the code becomes easier to read. I know that this is a technique that is not obvious for beginners. Nevertheless, it is useful. See for a possible, untested solution in JavaScript at the end of this post.

Now to your code in particular, ignoring what I just said about a data structure.

Second, I’d also get rid of these SomethingFollowUp variables and just call them target everywhere, like
set target to get record at "/Follow Up/Bryan" in database named "1. Smith Group"

Third remove all these move statements acting on a particular record and replace them by a single one after the end if:
move record to target.

After that, your code should be shorter and cleaner, which are both necessary for “easier to understand”.

Now to your question. Since you not only want to remove the single tag that your script is acting on but all tags, you could

However, I’m not sure that setting tags to an empty string works since tags are a list. So you might have to use {} instead of "". OTH, it might be possible that AppleScript converts the empty string silently to an empty list – it is known to be “clever” sometimes.

I’d (of course) rewrite that in JavaScript, like so (UNTESTED!)