DT Pro and Devon Agent both have a service called “Lookup…”. This is no problem when manually selecting from the menus, but is a problem for user keyboard shortcuts set via System Preferences.

Right now I am unable to set a keyboard shortcut for DT-Pro “Lookup” because it is instead grabbed by DA. And I wanted to start using it in some of Bill De_Ville’s great short cuts!

There are other examples of this problem (e.g. “Open URL” is also an OSX Service).

Would it be possible to use more unique and unambiguous names?

Thanks++ for suggesting this, Kay. Glad I’m not the only one who’d appreciate it. There may be other external non-Services references to DT that could use similar treatment. Oh, and I was glad to see the generically-named “Save to Printed” PDF Service disappear with 2.0.

While I’m thinking about it, maybe it’s worth considering capitalizing more lower-case words in DTP script names (and other places I’ve missed), e.g. these Safari Scripts: 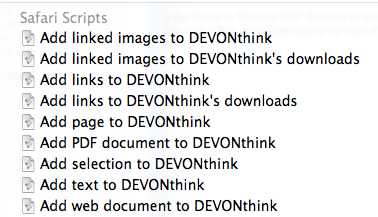 Maybe remove the “'s” from DEVONthink’s, too? Or I’m just being too nitpicky again.